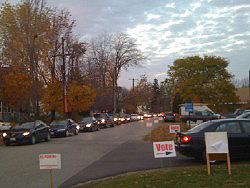 I hate losing elections, but what I REALLY hate is losing after a high turnout. Losing because our base didn’t vote is depressing, but at least it tells us what we need to do to win next time – and progressives can take heart in the fact that “the people” are truly on their side, if only they showed up. Last night, Maine’s Question 1 passed 53-47 – despite a much higher turnout than expected (we matched last year’s Obama level at the University of Maine in Orono, winning the campus 81-19.) The “No on 1” campaign also had a far greater field presence than the opposition, and superior financial resources. It reminds me of 2004, when Bush won despite the progressive base voting in record numbers. When California’s Proposition 8 passed last year, everyone could tell that our side ran an awful campaign. It was painful, but gave us many lessons to learn – lessons that the “No on 1” campaign in Maine took to heart, and performed beautifully. That’s why this loss is so much worse than Prop 8. I don’t know what we could have done differently, and am too sleep-deprived to think it all through.