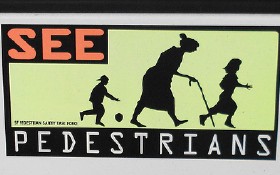 If the footage of 65-year-old Nu Ha Dam getting mowed down in a crosswalk at Leavenworth and Geary by a UCSF shuttle on Wednesday didn’t appall you, the continued failure of the San Francisco Municipal Transportation Agency (SFMTA) to improve pedestrian safety should.

So when the city comes out with a report modeled on the New York City Department of Transportation’s much heralded Pedestrian Safety Study and Action Plan, you could excuse me for getting excited. The 55-page document is chock full of great data on existing conditions, and at a minimum helps lend some visibility to pedestrians on paper.

Unfortunately, the report has no collision reduction targets, work plans or evaluation metrics that will result in safer streets. All it offers is this bit of drivel:

[While the SFMTA has] an important role to play in improving pedestrian conditions, specific collision trends can be also influenced by demographic, cultural, and economic changes that affect the amount and type of traveling people engage in. For these reasons the SFMTA has in the past not set an exact percentage goal for the reduction of fatal collisions in future decades, though of course it remains our mission to improve roadway safety as rapidly as possible. It is the general goal of the SFMTA both to see reductions in pedestrian injuries every year and to increase the number of pedestrian trips in the City.

Important role? You have a charter mandate to improve pedestrian conditions as part of the Transit First policy (”5. Pedestrian areas shall be enhanced wherever possible to improve the safety and comfort of pedestrians and to encourage travel by foot”).

You’ve had that mandate since the 1970s.

“They’re not setting any goals and that is something the MTA needs to do to show they are serious about pedestrian safety,” Elizabeth Stampe, the executive director of Walk SF, told me in reference to the report. While she was happy it presented the baseline data, she said it didn’t go far enough. “They need to set targets about how they plan to make the streets safer.”

When asked why there was no action plan, Bridget Smith of the SFMTA’s Sustainable Streets Division said: “The report we put together was really what New York City put together and we wanted to look at our work through that lens. It’s a professional to professional look at what they presented and how our city compares to New York City.”

Except for the action plan, which is nearly half of the volume of words in NYC’s report and arguably the most significant part of the whole endeavor. Without a plan that can be executed and proper metrics to measure the impact of changes, conditions won’t change.

For example, New York City has committed to reduce pedestrian fatalities by 50 percent by 2030, incorporating engineering, enforcement, public communication campaigns and a hefty legislative policy change framework that would make any advocate or public health official blush with excitement. They will dramatically ramp up Safe Routes to School improvements; they will expand their Safe Routes for Seniors program; they will re-engineer 60 miles of streets, 20 miles of them with “intensive safety redesign;” they will daylight corners to improve visibility; they will pilot slower speed zones across neighborhoods through engineering for calmed traffic; they will coordinate enforcement with the NYPD to target the riskiest driver behavior to pedestrians; they will push legislation for more red light cameras, speed cameras, mandatory truck crossover mirrors, and increased penalties for unlicensed drivers; and they will update they NYC Pedestrian Safety Act, which requires the NYC DOT to improve the top 20 most dangerous locations for pedestrians.

And what about San Francisco? If you’d like to follow along for yourself, scroll down to the bottom of page 50.

San Francisco will continue to do a litany of things (but given the data, those things apparently aren’t working to make the city much safer for pedestrians). More countdown timers will be added, which the report spends a page telling you we helped pioneer, and we’ll continue our analysis of higher collision corridors, areas, and intersections, continue our expansion of audible pedestrian signal locations, continue the installation of traffic calming measures to slow vehicle speeds, continue the removal parking at corners to improve pedestrian sight distances, continue the expansion of the use of “continental” or “ladder” type crosswalks.

When I pushed SFMTA’s Smith on why they didn’t set targets for reducing the number or rate of collisions, she said there were “a couple of things in development” and that they were considering a “pedestrian master plan.” Smith also pointed to their work with other agencies on the Better Streets Plan as instructive and ripe for possible future collaboration.

When I questioned how the Better Sidewalk Plan (to steal Livable City executive director Tom Radulovich’s derisive sobriquette) would address dangerous speeds, illegal turning in occupied crosswalks or other driver behavior, Smith acknowledged its shortcomings. “We all recognize that we’d like to expand the work,” she said. “It was always intended to be the ‘Pedestrian Realm Plan.”

In a prior Streetsblog article, Dr. Rajiv Bhatia of the San Francisco Department of Public Health blasted the city’s efforts to date on pedestrian safety, calling the failure to add known safety improvements “transportation malpractice.”

When I asked Smith about the criticism by Bhatia, she said: “Rajiv could take the leadership role on it.”

Unfortunately, that’s probably not going to be effective. The SFMTA is the implementing agency with responsibility for controlling our streets and improving pedestrian safety. The SFDPH has zero input on whether or not Leavenworth and Geary will get a “continental’ crosswalk, bulbouts or other treatments, nor whether or not that would have done anything to save Nu Ha Dam.

About the only thing the SFDPH can do about that is add her to the statistics they keep on pedestrian injuries and fatalities.

I know I shouldn’t just pick on Bridget Smith here. SFMTA Executive Director Nat Ford and Mayor Gavin Newsom, neither of whom have said boo about targets for improving pedestrian conditions, deserve at least as much credit, if not much more. Without bold leadership and a clear mandate, there is probably little Smith or any other well-meaning planner could accomplish at the agency.

While I was heartened to hear SFMTA’s newest board director, Cheryl Brinkman, discuss the importance of improving pedestrian safety (Brinkman, in the board meeting on Tuesday: “I think there is a lot more we can do including lowering speed limits to make sure that any interactions between pedestrians and cars are not fatal”), the real work has yet to begin.

Smith did say they had priced out an action plan and they just need to find the money to complete it. Maybe Brinkman and Chair Tom Nolan can show some leadership in securing this funding.

Compared to the hundreds of millions they’re going to be asked to issue in municipal bond debt to fund the Central Subway next year, what’s a few hundred thousand to keep more pedestrians from being run over in the crosswalk?

This piece was first published on Friday at San Francisco Streetsblog.