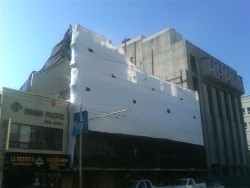 After years of decline, Golden Gate Avenue in the Uptown Tenderloin has two large-scale development projects to boost the neighborhood’s transformation. The first is at the long vacant “KGO Building” next to Hastings Law School – KGO left in 1980 – whose demolition will spawn the construction of a 90-unit market rate project approved over a decade ago. The second is TNDC’s renovation of the former YMCA at Golden Gate and Leavenworth, which restores one of San Francisco’s great historic buildings and that includes 174 efficiency studio units and major non-residential improvements. With Mercy Housing about to commence a major historic renovation of the Arlington Hotel at Leavenworth and Ellis, this brings three dramatic new projects to the Uptown Tenderloin Historic District’s Leavenworth corridor.

In July 2006, I wrote an article describing the steep decline of Golden Gate Avenue in the Uptown Tenderloin, suggesting it reflected the community’s broader problems. Today, Golden Gate Avenue may instead be embodying the neighborhood’s brighter future.

A month after I wrote my article, Doug Sonn and Tim Brown opened Morty’s at Golden Gate near Hyde, which has since become one of the area’s most popular lunch spots. At the time, both looked forward to the imminent construction of 90 market rate units at the former KGO building directly across the street.

But the unexpected death of the building’s owner combined with unforeseen engineering difficulties put off the long vacant structure’s rehabilitation. When the dust cleared, demolition was necessary (the building had been modernized and was not historic).

If you have watched the demolition of those giant Las Vegas hotels and casinos, you would think that demolishing the much smaller KGO building would only take a few days. But those hotels were not abutting another structure, and in this case KGO’s neighbor is the state’s oldest law school.

This meant that demolition was conducted brick by brick, not via explosion. And this took over six months before finally being completed this week.

Owner Seamus Naughton has financing for the long approved 90 units, and is ready to begin construction. This will revitalize a site that has been dormant for thirty years, and Morty’s will finally get the lunch business from construction workers that it anticipated back in 2006.

President William Howard Taft attended the YMCA’s opening in 1909, and anyone familiar with the structure at 220 Golden Gate knows it is one of San Francisco’s great properties. According to TNDC Executive Director Don Falk, the $50 million invested by the Mayor’s Office of Housing is the most it has ever contributed for a single building –of course, no prior project involved such an historically and architecturally significant building.

Those familiar with the YMCA know that its 138,023 square feet includes far more than 174 housing units whose amenities include lounges, laundry facilities, and a landscaped roof deck. The project restores and preserves an historic auditorium, gymnasium, lobby, atrium, and mezzanine, and re-introduces a grand entry staircase. The building will also house a health and wellness center operated by the San Francisco Health Department, a childcare center, and approximately 1450 square feet of retail.

The combination of the KGO project and the YMCA will bring hundreds of residents to long vacant sites, returning positive street activity and disposable income to the neighborhood. For these two projects to be moving forward while many others across the city are stalled due is a positive sign for the Uptown Tenderloin’s future.

Two blocks from the YMCA on Leavenworth and Ellis is the historic but long neglected Arlington Hotel. Its renovation will soon commence, meaning that there will be three major developments in the Uptown Tenderloin within three blocks.

The Arlington has long been troubled by high vacancies, deferred maintenance, and weak retail tenants on its long Ellis street frontage. Mercy Housing completely galvanized the corner of Ellis and Larkin when it beautifully restored the historic Essex Hotel, and has similar plans for the Arlington.

It’s possible that cars driving up Leavenworth will soon see a restored YMCA at Golden Gate, an Uptown Tenderloin museum at Eddy, and a rehabilitated Arlington Hotel on Ellis. This trio would greatly enhance public perceptions of the area, and spark further investment.