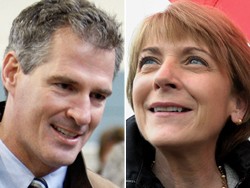 One year ago today, Barack Obama was inaugurated President – and the U.S. Senate had 58 Democrats. We didn’t have 60 votes, but nobody said that health care was doomed. Martha Coakley’s defeat in Massachusetts now means that Democrats have a 59-41 majority – or a net gain of one seat from last year. But judging by the media coverage, it sounds like Republicans have “taken over” the Senate. There hasn’t been this commotion since 2001, when Jim Jeffords’ party switch cost Republicans their majority.

Of course, Republicans control the Senate if they have 51 votes. We never see them held to a higher standard of 60 votes – and in fact, the G.O.P. has never had a 60-vote majority. We never saw moderates like Olympia Snowe join a Democratic filibuster – but Joe Lieberman killed the public option merely by threatening to do so. With Scott Brown now pledging to be the 41st vote to kill health care reform, Democrats cannot react by ramming through a bill before the Senate seats him. Republicans are not interested in governing; it’s time to pass a real bill through reconciliation.

Imagine if, on the eve of George W. Bush’s Inauguration, a liberal pundit – e.g., Keith Olbermann – had said that he wanted the President “to fail.” There would have been an outcry. He would have been called a “traitor” for insulting our Commander-in-Chief “while we’re at war” – and Democrats would not have hesitated to denounce him. I’m sure there would have been a quick unanimous Senate Resolution calling upon his ouster.

Twelve months ago, Rush Limbaugh said the same thing, but instead the Republican Party rewarded him by taking it to heart. It didn’t matter that they had just lost two elections in a row – after George Bush had destroyed their party label for decades. South Carolina Senator Jim DeMint vowed that health care would be the President’s “Waterloo” – determined not to give him the satisfaction of a victory.

And that’s where we’ve been for the past twelve months. In paralysis, because the Right refused to give Obama an inch – and now a product of that riot has Ted Kennedy’s seat.

Politics may be the “art of compromise,” but how do you negotiate with opponents who care more about you failing than getting something done? And while Washington kept up its fetish with “bipartisanship,” the Beltway was oblivious that Republicans had been rebuked at the polls. It’s one thing to have bipartisanship when the Senate’s partisan split is 51-49, but Democrats holding both houses at supermajorities should mean something.

But the White House – and Senate Majority Leader Harry Reid – never got that memo. Maybe they should have gotten a clue after Arlen Specter switched parties. At Netroots Nation, the Pennsylvania Senator claimed he “effectively became a Democrat” after being one of only three Republicans to vote for the federal stimulus bill. He had quit a party that no longer believed in governing, and simply deserved to be ignored.

The Republicans threatened to filibuster everything in the Senate – and they did mean everything But these were not the traditional filibusters where Senators stay up all night reading the phonebook, like that old Frank Capra movie. As Tom Geoghan described in a must-read piece for The Nation, these are just back-door threats where Senators can anonymously express their intention to not end debate – a motion that requires 60 votes to overrule.

“At least with the old filibuster,” wrote Geoghan, “we knew who was doing the filibustering. With the modern filibuster, senators can hold up bills without the public ever finding out their names. No one’s accountable for obstructing. No senator runs the risk of looking like a fool. But while they’re up there concealing one another’s identity, the Republic is a shambles. And now, with a nominal sixty Democratic votes, the need for secrecy as to who has put everything on hold may be even greater than before.”

Reid and Obama could have called their bluff and let the Senate Republicans bloviate on C-SPAN about why we can’t have universal health care – which would have allowed everyone to see what kind of nutcases they are. Instead, they reacted by trying to cut backroom deals to get the crucial sixty votes. Suddenly, Senators like Olympia Snowe were elevated to sole decision-maker, as crucial parts of the health care plan were mollified to get her vote.

But the problem wasn’t just Republicans. After all, they were only 40 of them – so their threats to filibuster were toothless. No, it was conservative Democrats like Ben Nelson, Blanche Lincoln, Mary Landrieu and Joe Lieberman – who threatened to filibuster if we did not cater to their every whims. You can’t negotiate with someone who opposes the public option because it’s “unfair to private insurance” (Landrieu.) You can’t negotiate with someone who opposes any compromise that liberals find acceptable (Lieberman.)

Of course, the Democratic Party is a “diverse coalition” – and we couldn’t expect all 60 Senators to vote for a progressive health care bill. But that’s not what we asked them to do – merely let a floor vote happen. And filibustering goes way beyond opposing a bill – it says you are willing to actively collude with Mitch McConnell and the G.O.P. minority to obstruct all debate. When Republicans controlled the Senate 55-45, some Democrats threatened to filibuster – but you never saw moderates like Snowe join their efforts.

Any Democrat who threatened to filibuster the public option was effectively declaring war on the President, war on his agenda and war on their Party. They were aiding and abetting the enemy – right-wing ideologues who want the President to fail. A proper thing would be to have them kicked out of the caucus and stripped of all committee assignments. But Joe Lieberman was allowed to keep his chairmanship – and Rahm Emanuel, pressured Reid to cave to whatever he – and Ben Nelson – wanted, just to get the 60 votes.

Which brings us to yesterday’s special election in Massachusetts. Coakley was a weak candidate who took the race for granted. But polling data shows that her numbers started going down right after the Senate passed the health care bill – stripped of all meaningful value by the extortion of right-wing Democrats. Voters do not want a law that forces them to buy private health insurance (without a public option to keep these greedy companies honest), fines them if they don’t and with no benefits until at least 2014.

“I voted for Obama because I wanted change,” said a Massachusetts voter who picked Scott Brown yesterday. “I thought he’d bring it to us, but I just don’t like the direction that he’s heading.” That’s what happens when you fail to deliver: old friends desert you, while your base is so depressed that they can’t bother to vote. Obama won Massachusetts by 26 points in last year’s election. A large chunk of those people didn’t come out again.

If Democrats care enough to save their hides for November, they must dump the 60-vote politeness – and pass a strong health care reform bill through the reconciliation process. Republicans proved a long time ago that they didn’t care about governing, and weasels like Joe Lieberman proved they are all too eager to enable them. The American public gave them a mandate to deliver, and they don’t care if it’s not a “bipartisan” effort.

Otherwise, Democrats will deserve to lose in a lot more states than just Massachusetts.