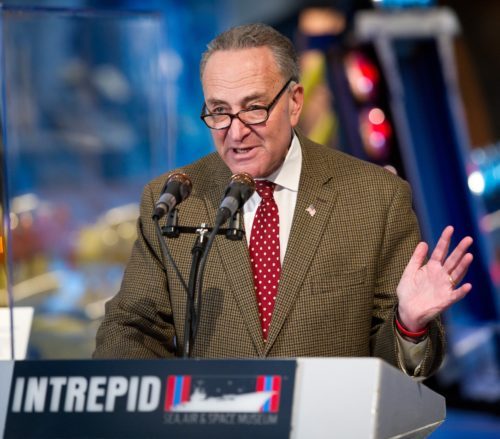 Sen. Charles Schumer, D-N.Y., speaks during a ceremony where NASA transferred title and ownership of space shuttle Enterprise to the Intrepid Sea, Air & Space Museum on Sunday, Dec. 11, 2011 at the museum in New York City. The transfer is the first step toward Intrepid receiving Enterprise in the spring of 2012. Photo Credit: (NASA/Bill Ingalls)

Yesterday, Senate Minority Leader Chuck Schumer said he will “claw, scrap, and fight with every fiber of my being” to overturn Donald Trump’s executive order preventing refugees and residents of seven Muslim-majority countries from entering the country. If that’s the case, Schumer should abandon his strategy of dealmaking with Trump on a big infrastructure bill.

While Trump and Steve Bannon assault the Constitution, religious freedom, and basic humanitarian decency, Schumer and other Democrats have been searching for common ground on infrastructure. At the Transportist, David Levinson, a civil engineering professor at the University of Minnesota, says Democrats are making a big blunder, both in terms of politics and policy: