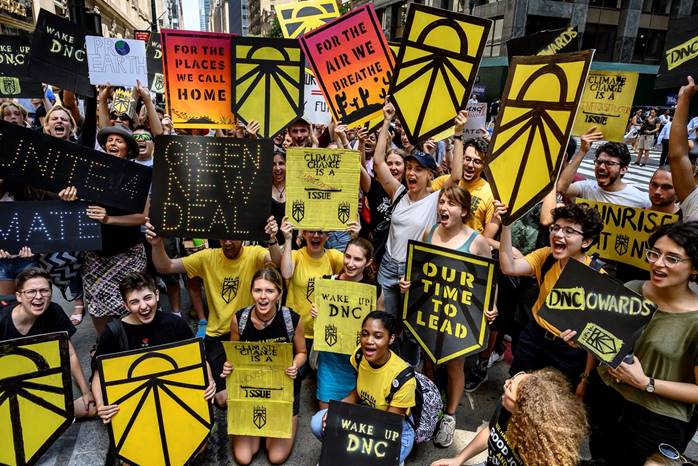 The Sunrise Movement links the housing and climate crisis

The California Air Resources Board found that California will not meet its greenhouse gas emission goals due to excessive driving. But local politicians continue to divorce this transportation crisis from the housing policies they enforce.

Nearly all locally elected Democrats publicly say battling climate change is a top priority. Yet as I detail in Generation Priced Out many if not most politicians in Seattle, Austin, Boulder, Berkeley, Denver, Cambridge and other leading “progressive” bastions still support banning new multi-family housing on much of their city’s buildable land (Minneapolis and Portland are the exceptions).

It’s easy to blame Donald Trump and the Republican Senate for climate change denial; but many of those running our nation’s blue cities are guilty of the same. Politicians opposing increased density and infill housing—and measures like California’s SB50—- reject the actions called for by the UN Report and others.

Poop vs the Planet’s Future

In San Francisco, the UN report was overshadowed by media coverage of poop on city sidewalks. This came in response to Supervisor Matt Haney’s call for 24-hour toilets in the city, a meritorious cause backed by a new study.

People do not like seeing poop. Adding toilets does not require residents to make lifestyle changes they oppose. In contrast, urban residents stopping infill housing and increased density do not directly confront the immediate negative environmental impacts of their position. They disconnect the negative health impacts of greenhouse gas emissions from their land use policies worsening climate change.

Local policies limiting plastic bags, plastic straws, and single-serve cups are all good. But none impact rising greenhouse gas emissions caused by lengthy daily car commutes. Much of this driving, like the 140,000 daily commuters from Sacramento to the Bay Area, is caused by cities refusing to open neighborhoods to new apartments.

You can’t be sincere in battling climate change while opposing six story homes on transit corridors and fourplexes and “missing middle” housing citywide.

For a more detailed breakdown of the UN Report and its implications for housing policy I recommend Michael Andersen’s November 27 story, “End Apartment Bans to Save the Planet, UN Climate Report Says.” Anderson is with the Sightline Institute, a national leader in highlighting the housing/ climate policy connection. Sightline is a co-host of YIMBYtown 2020: Fair and Sustainable Cities to be held in Portland April 2-4. Climate change is one of the conference’s two key themes, along with community stabilization.

Anderson’s story ends with this quote from Sara Wright of the Oregon Environmental Council: “We can change our cities now, with thoughtful reforms that help people in our community live the way they already want. Or we will all be forced to change our lives later, in haste.”

It doesn’t matter how many Green New Deals cities pass if the necessary land use policies are not implemented. The Sunrise Movement, which believes “climate + affordable housing crises are inherently linked,” routinely holds a banner asking politicians “Which Side Are You On?”

Their message is clear: until local politicians connect housing and climate policy we know which side they are on. The side making climate change worse.

Randy Shaw is Editor of Beyond Chron and author of Generation Priced Out: Who Gets to Live in the New Urban America