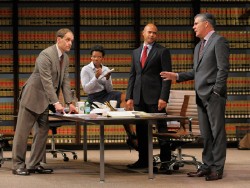 In David Mamet’s play “Race” there is never a dull moment with non-stop four letter words that will jolt you to the edge of your seat. Yep, it’s such fun to listen to Lawyers verbally slay each other in this hyper, super bowl of drama.

Then there comes a kink in the whole mix. First of all the Millionaire wants to confess to the Press. The Lawyers think it is an insane idea, because they have found some loopholes. The most important part being that the Black women claims that he ripped her sequined dress off of her and threw her on the bed. It was found by an outside source that Sequins were not found in the Hotel room.

The Lawyers seem to have a good case until an employee (who just finished Law School) is putting the skids on the whole thing. “You sold us out didn’t you Susan?” Yes, Susan (a Black woman) has been working for the other side. She wants to see the Millionaire in jail. And guess what – suddenly hundreds of sequins were found under the bed at the Hotel. Susan claims she had nothing to do with it.

There are many twists and turns in this addictive thriller. Mamet has great flair for words, that are deliciously unsettling. He is simply brilliant. It sure keeps you guessing to the end.

The supercharged Attorneys, go on with their Cat and Mouse interigation, as they try to trap Susan into confessing that she has “Sold them out.” Did she or did she not? That is the question that everyone is wondering about.

THE ACTORS GAVE PERFECT PERFORMANCES. THEY ARE ASTOUNDING! STAND UP AND CHEER FOR: Chris Butler – Anthony Fusco – Susan Heyward – and Kevin O’Rourke.

Then there is the new boy, who is barely of legal age. Or at least looks that way. Ricky (Noah Longton) comes into the movie biz with his bright eyes wide open. Will this lead to stardom? Who knows – but no doubt millions will watch the Video in comfort at home as they exercise their body parts.

Jamie (Jared Scott) has been in many plays at New Conservatory, A Larsen Show called “All Male Peep Show” and the Off-Broadway hit – “Sleeping with Straight Men” (which he also produced.” Scott is one of the best actors around – and it’s good to have him back.

There is a lot of badass ass-kicking stuff. Even the furniture can’t take the brutality. Hey, this is not Yoga. It’s real hockey player stuff. I think you guys will be pleased with the “Super Size Action.”

It kind of ends with a cuddly touch. Here are some words from a well known song: (not in the play) — but right for it.) “Tonight the night of love is in your eyes, but will you love me tomorrow?” And that is a tough one to answer. Maybe it should be sung to something a little bit lower.

HERE IS THE NAKED TRUTH. The entire cast IS ripping good. They worked really HARD, and gave award-winning performances. They should be proud of their talents. It’s sexy — and terrifically twisted, and funny.

THE DIRECTOR RONNIE LARSEN (he plays Arthur (Director) in the show — is also a famed Playwright.) He’s amazing.

You should really try to see this “Tongue in cheek play.” It’s at 125A Hyde Street (Near Golden Gate) at, the Custom Made Theatre.