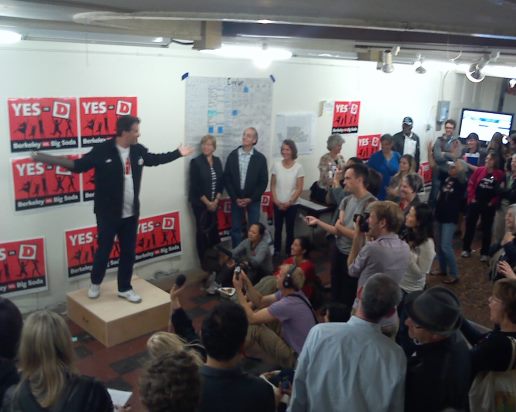 In the wake of Tuesday night’s landmark victory for Berkeley’s Measure D soda tax—it got a whopping 75% of the vote– New York Times food columnist Mark Bittman sees rough times ahead for Big Soda. “In the long run, they are doomed – people will drink fewer sugary drinks,” he told me in an e-mail. “This very significant victory brings ​that inevitable scenario that much closer.”

Now that Berkeley has led the nation in passing the first excise tax on sugary beverages, will other communities follow suit? Or is Berkeley, as Big Soda spokesman Roger Salazar maintains, “not necessarily the trendsetter that they claim to be”?

One person who is certain that other communities will follow Berkeley’s lead is Berkeley Media Studies Group director Lori Dorfman. About Salazar’s claim, she responds, “He couldn’t be more wrong. Berkeley was the first community in the country to pass a clean indoor air law. We didn’t see that fizzle and die, now did we? [By 1999, 45 states and the District of Columbia all had laws regulating smoking.] Berkeley is unique, but it also has the same problems every modern urban environment faces. The difference is that Berkeley is a daring innovator taking health and well-being seriously.”

Sara Soka, campaign manager for Berkeley vs Big Soda (the Yes on D campaign) agrees. “What happens in Berkeley doesn’t stay in Berkeley,” she says. “Berkeley’s public school system was one of the first to voluntarily desegregate in 1968. It’s led in public school food policy, smoke-free areas in restaurants and bars, curb cuts for wheelchairs. All these positive changes are now mainstream. Communities across the US have the same essential ingredients that made the soda tax pass here: parents and community leaders that care about the health of their kids. When the time is right, we fully expect other places to take on the soda industry and succeed.”

Xavier Morales, executive director of the Latino Coalition for a Healthy California, told me that entities across the state have just been waiting to hear what happens in Berkeley and SF to advance their own local plans for a tax, and that there are ongoing discussions at the state level regarding the feasibility of a soda tax bill to help reduce diabetes, heart disease and stroke. “Other cities in the Pacific Northwest have also been watching both San Francisco and Berkeley with great interest,” he said.

Harold Goldstein, executive director of the California Center for Public Health Advocacy, predicts, “Berkeley’s success throws open the doors for other cities to establish general taxes. Cities throughout the state and across the country will follow suit, first a few at a time. And then after cities will come states, and after states will come a national soda tax.  It is just a matter of time.  That’s how social change happens. The movement has just begun, led by the hard work of those who care more about the health of their children and their communities than the ability of the beverage industry to continue selling liquid diabetes without restraint.”

What action against sugary drink consumption might we expect to see on a statewide level? Goldstein says, “Definitely warning labels. That’s going to be the next big thing, I think.”

A bill that would have required warning labels on sugary beverages passed the California Senate earlier this year but was defeated in the Assembly’s Health Committee; a similar bill is pending in the New York Assembly.

Soda taxes, of course, are just one tool in the toolbox of public health advocates determined to fight back against the harm done by sugary beverage consumption. Michael Jacobson, executive director of the Center for Science in the Public Interest, says,

“The real solution, though, to the sugar-drink problem would be for the FDA to approve CSPI’s February 2013 petition that called on the agency to set a limit on the sugar content of beverages. Limiting sugar to about 10 grams per 12 oz. would pretty much solve America’s sugar problem.”

“This is the model”

Jeff Ritterman, MD and former Richmond City Councilmember, who led the failed soda tax effort in Richmond (CA) two years ago, summed up what many people in the Bay Area were feeling on election night.

“Thanks to the people of Berkeley,” he said. “Because you’re making it possible for others to do this.  Everyone is now watching.  We now need to see that the soda tax is effective, for the current generation of children and those children waiting to be born.  This is the model for what we need to do in all kinds of areas – taking science and translating it into sensible policy, to make this a healthier world.”