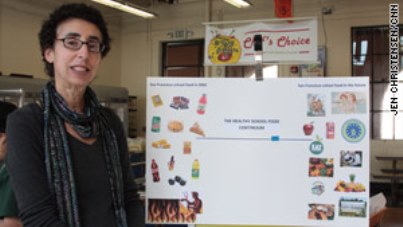 Dana Woldow, Beyond Chron’s Contributing Editor and a national expert on food politics, died last week in San Francisco. Woldow’s death is a terrible loss for her family and friends. It is also a significant loss for millions of kids eating school lunches who have lost one of their most passionate advocates.

Dana Woldow was an intellectual giant. She was a brilliant visionary,  respected and considered a peer by the nation’s leading writers on food politics. I felt honored that Woldow chose to make Beyond Chron her writing home as she had the highest intellectual standards.  As her friend and colleague Bettina Elias Siegel noted in her wonderful obituary last week, Woldow “did not suffer fools gladly.” She kept me on my toes and Beyond Chron became a much better publication because of her input.

When Dana Woldow wanted to make a point about food politics, she launched it like a laser. Her stories were filled with links, analysis, and cogent arguments—and were never without tremendous passion. Whether the target be Revolution Foods, the San Francisco Unified School District, or a district somewhere in the United States that was mistreating kids getting school lunches, all knew they were vulnerable when Woldow exposed their wrongs.

Woldow did not simply write her own articles. She also recruited other writers and stories to publish in our pages. These included Bettina Elias Siegel, Dr. Dan Taber, Casey Hinds, Andy Bellatti, Nancy Huehnergarth, and others.

Woldow applied her own high standards to these submissions, editing the works of her colleagues and making them stronger. She even created a style manual for Beyond Chron submissions.

Woldow was a beloved and trusted figure in the food politics world because her only agenda was what was best for kids’ health; her eagerness to get the stories of her colleagues to a larger readership was part of this.

Dana often had suggestions for improving Beyond Chron. I soon realized she was always right. She brought her personal Twitter strategies to our publication, and would recommend when and where I should tweet her stories and to whom. She would get so happy when a national figure like Marion Nestle (who wrote her own Woldow obituary) or Mark Bittman would retweet one of her stories, as that meant a lot more readers for her story on Beyond Chron.

Dana’s absence from Twitter in recent weeks had me worried about her health. She had a medical problem that she did not want to publicly discuss that explains her lack of writing this year. I last communicated with her in mid-March but was careful not to ask how she was doing—she had made it clear that she did not want inquiries on the progress of her medical condition.

Although Dana and I were in constant email contact for years and regularly spoke by phone, I only met her twice. The first time was when Margaret Brodkin introduced us in my office, and then it was years later at Mike Sugerman and Janice Wright’s 2015 Hanukah Party. Such is the world of online news. Our interaction gave no indication that she was in ill health (though I knew her diagnosis) and it led me (incorrectly) to hold out hope that she could live for several more years.

I know I speak for many who knew Dana when I say that she will not be forgotten. I will never be able to read a school lunch story without thinking of Dana Woldow.

Fortunately, every story she wrote for Beyond Chron can be found by clicking on Dana Woldow on our contributors page. Dana used to question why some of her past stories ended up in our “Most Read” section, convinced that it had to be a mistake. She would ask me to delete those stories from the site.

But after I checked 2016 readership for a May 16, 2011 story she wrote about chocolate milk, (“Chocolate Milk in Schools: Ban it, Keep it, or Change it?”), I convinced her that people were in fact going back to read some of her past stories. And I hope people keep doing so.

Dana, I know you were not big on emotion but I am terribly sad you are gone. You were one of a kind. Thank you for everything you did for Beyond Chron and for the millions of kids who will be eating healthier school lunches because of your advocacy.