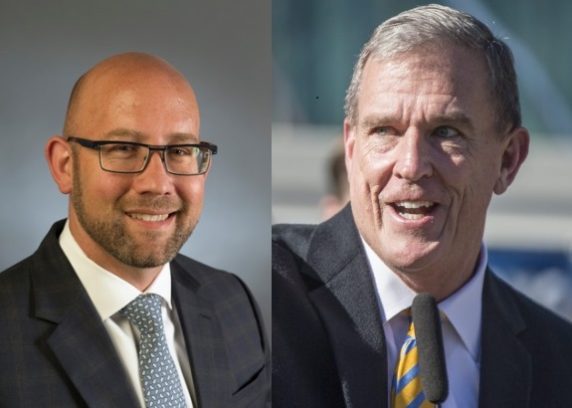 Prop C’s Own “Poison Pill” and the Politics of Housing

In addition to its mayor’s race San Francisco has a hard fought battle for supervisor in District 8, ballot measures for childcare and affordable housing /homelessness, and four competitive judicial elections. Here’s our take on their status as absentee voting begins.

Last September, my analysis of the race had Sheehy in “good shape.” I saw the June election coinciding with Sheehy-backer Gavin Newsom also being on the ballot as a huge plus for the current supervisor. I also thought D8 voters who backed Scott Wiener for supervisor would stay with the Wiener-backed Sheehy.

But after Sheehy cast the deciding vote to install Mark Farrell as Acting Mayor, I overreacted and wrote on January 25 that Mandelman would “win in a landslide.” I questioned whether Sheehy would even run a campaign after alienating some of his key supporters with his acting mayor vote.

I ran into Sheehy the day after I wrote that story and he joked that he was glad he could prove he was “not dead.” And he was right. My prediction of his demise, made as some of his backers were angry over the Farrell vote, was premature.

My original September 2017 analysis framed the D8 race around the candidates’ connection to Mayor Lee.  That is now gone. While I still see some Mandelman backers claiming that voters need to reject Sheehy for being appointed by Lee,  that’s likely because Sheehy’s pro-tenant, pro-labor voting record gives them nothing specific to attack (Sheehy has been among labor’s top supporters for a revised Minimum Compensation Ordinance).

Mandelman never took victory for granted. His grassroots machine is working harder than ever and he remains the favorite. Yet the combined impact of the district’s two most popular politicians —Newsom and Wiener—backing Sheehy could still deliver victory to the incumbent.

I see D8 residents as having to choose between two very strong representatives. Voters in all districts should be so fortunate.

Unfortunately, both measures are embroiled in mayor’s race politics and other outside factors.

Prop C is identified with Jane Kim. It is also strongly backed by labor unions, which expects $19 million from Prop C  to fund higher wages for nonprofit workers through a revised Minimum Compensation Ordinance (MCO) (15% of the measure is expressly allowed to be diverted to other purposes).  The current MCO—which sets the minimum hourly salaries for workers employed by nonprofits with city contracts—would be $15.00 on July 1 (See my story, “San Francisco Battles Over Workers Pay,” which makes the case for a higher MCO).

Prop C backers wisely took advantage of a recent California Supreme Court ruling allowing tax increases to pass with only a simple majority if put on the ballot through signatures. As a result, Prop C only needs 50% plus one to prevail. Prop D was put on the ballot by the Supervisors, so needs the traditional 2/3 vote.

I have heard a lot of pro-housing folks say they are opposing Prop D because they are mad that it has a “poison pill” provision that would not allow both it and Prop C to pass. They claim that Prop C backers were selfish, and that both measures could have won.

Yet Prop C contains an identical poison pill. It is in the last paragraph of the initiative:

Since Prop C also includes a “poison pill,” this attack on Prop D for having the same provision seems solely designed to insulate opponents from criticism that they are allowing politics to block funding for affordable housing and homelessness. Prop C’s “poison pill” has been ignored by those attacking Prop D for including such a provision.

Prop C’s poison pill was inserted months before Prop D was put on the ballot by the Board. So whether Prop D included such a provision ultimately made no difference.

With affordable childcare a popular cause and Prop C needing only a majority vote, it is in good position to win. Opposition mailers and social media ads from BOMA have begun, and a heavily funded No on C campaign could still prevail. But whether such a campaign will happen is unclear.

Prop D is the biggest funding measure for housing homeless persons in San Francisco history. It appears on the ballot when concern about tent encampments is high.

So one might think that city leaders would all be behind Prop D. But as I explained in March, not a single “progressive” supervisor has endorsed Prop D. Nor has Mark Leno, whose mayoral campaign claims it will build 5000 affordable units annually but ignores the one measure on the June ballot that would help provide the funding to even come anywhere close to meeting this goal (Leno emailed SFHAC on the night of May 9 saying he supported Prop D, but had not communicated this to the Yes on D campaign nor posted his support on his campaign website. So it remains unclear how Leno backers would know their mayoral favorite urges a Yes vote on Prop D).

Leno instead speaks of a regional housing bond at some unspecified date that I believe has about a 0% chance of happening. Kim, who opposed the prior homeless funding sales tax  measures , Prop J and K, in 2016, states on her website that she will put a $1 billion affordable housing bond on the November 2019 ballot. If that bond somehow overcame widespread homeowner opposition due to the property tax hike, the money would be available in San Francisco at the earliest in 2021.

Prop D’s money can start being spent as soon as January 2019. That makes a huge difference given the urgency of the city’s housing and homelessness crisis.

Why have “progressive” supervisors and groups not backed Prop D? While Mayor Lee’s death created process problems and the lack of a “Big Tent” to reach consensus,  the main reason is that Prop D is identified with Ahsha Safai and London Breed.

Neither reside on the city’s curiously-selected progressive island. Progressives would rather wait for a 2019 housing bond backed by Mayor Kim than potentially help Breed get elected mayor in June by backing Prop D (Norman Yee remains in good standing as a “progressive” despite opposing any homeless services in his district, and after killing affordable senior housing in D7).

The lack of support for Prop D is part of the progressive failure toward addressing the city’s housing crisis.  Were it not for “moderate” Mayor Lee driving the affordable housing funding process, San Francisco would not have passed either its $1.3 billion Housing Trust Fund in 2012 or its $310 million affordable housing bond in 2015.

Four public defenders are challenging four sitting judges in June. I previously wrote about one of the judges trying to kill rent control, and fortunately failing.

I’ve heard a lot of opposition to this electoral challenge to judicial orthodoxy. For those uncomfortable with the very idea of people running against judges who haven’t been guilty of moral turpitude, consider the work of former California Governor and Attorney General George Deukmejian, who died this week at age 89.

As Attorney General, Deukmejian circumvented normal confirmation processes to successfully stop the brilliant United Farmworkers attorney Jerry Cohen from serving on the Court of Appeal following his appointment by Governor Brown. Deukmejian then led the effort to recall three pro-labor and pro-tenant judges from the California Supreme Court.

Excuse me if I don’t buy the lectures about not removing judges for their ideologies. Conservatives do it all the time. Deukmejian used these judicial blocks to reach the Governor’s office, and we have seen how Republican Senators denied confirmation of Merrick Garland, Obama’s 2016 Supreme Court nominee.

It’s extremely difficult to unseat a sitting judge. But attorneys certainly have the right to try.

As for other measures getting attention, I have not written about Prop F, the Right to Counsel, because I am convinced this vital measure will win and have not heard of a major opposition campaign. The question with Prop F is implementation, as there is currently no money in the budget to fund it.

Prop G, the education parcel tax to fund teacher salaries, should be an automatic yes vote (both my daughters are SFUSD teachers).

Prop H, the POA’s taser measure, is a bad idea that seems headed for defeat. Prop E, which seeks to protect the city’s ban on candy-flavored tobacco products, should pass (sponsored at the Board by Malia Cohen).

Randy Shaw is Editor of Beyond Chron. Both he and the organization he heads, the Tenderloin Housing Clinic, have endorsed Prop D and Prop F.