D.C. Archbishop is a Bigot 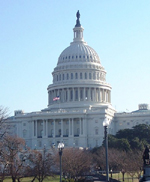 It’s always interesting to listen to Catholic clergy trying to justify their anti-gay bigotry. Consider the announcement this week by Archbishop Donald W. Wuerl of the five-county Archdiocese of Washington, D.C. that he is dropping the spousal benefits offered to Catholic Charities workers in order to avoid coming into compliance with the District of Columbia’s newly enacted gay marriage law that mandates extending those benefits to queer couples.

Wuerl, it seems, would rather deny heterosexual couples benefits than grant them to queers who work for his agency. As of March 2, a new benefits plan is in effect for Catholic Charities that does not cover spouses of new employees or even of current workers who have not yet made the request for inclusion of a partner. Spouses already covered will continue to receive benefits.

In mid-February, Wuerl shut down Catholic Charities’ 80-year-old foster care and public adoption program rather than open up its services to queer couples, as required by the new D.C. law. The program was turned over to another agency.

“Catholic Charities changed its employee benefit plan to comply with the D.C. same-sex marriage law,” Edward Orzechowski, president and CEO of Catholic Charities, told the Washington Times. “We continue to honor health care coverage of all employees but as of today new and current employees will not be able to add spouses to the health care plan.”

“And as an organization doing business with the District of Columbia, we are required to comply with that law and its requirements,” Orzechowski continued. “The only issue here was to treat all spouses the same and that’s why we made the change.”

Actually, Mr. Orzechowski, it was not to treat all spouses the same, it was to avoid treating queer couples the same as straight ones. That’s a big difference.

Orzechowki and Wuerl can talk around it all they like, but the truth is that there’s only one thing that accounts for what Wuerl is doing. It’s not the fact that the D.C. legislature voted to extend marriage to queers.

It’s the bigotry of the Church and of Wuerl.

Wuerl should fess up: His bigotry is driving him to screw over his own workers as well as the needy people Catholic Charities serves.