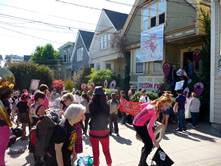 Days after activists rallied in his defense at his longtime 460 Noe home, San Francisco tenant Jeremy Mykaels won a critical court victory in his effort to avert an Ellis Act eviction on October 23. In a ruling on a motion to quash the eviction notice brought by Mykael’s attorney Steve Collier, Judge Ronald Quidachay held that the Notice of Termination of Tenancy was defective for failing to state the correct amount of rent. While the landlord can appeal or issue a new one-year eviction notice, other factors make this far from a slam-dunk case.

The attempted eviction of Jeremy Mykaels, a gay man living in the Castro with AIDS, has aroused tremendous outrage. Mykaels has lived in the Castro for forty years and in his current unit for seventeen. The ability of the state Ellis Act to preempt his local eviction protections strikes many as immoral, and has led to renewed calls for changes to the Ellis Act at the state level.

Mykael’s landlord seeks to merge the rental units in Mykael’s building into a single family home. But he faces a major challenge. The Planning Commission will have to approve this merger, and has been reluctant to eliminate rental housing in the past. In the face of massive public opposition at a future hearing on the merger, the landlord faces an uphill battle to achieve the goal for which Mykael’s eviction is said to be necessary.

Some have wondered how legal representation makes a difference in Ellis cases. Mykael’s case again shows how important it is.

We will keep readers posted on ongoing developments in this case.