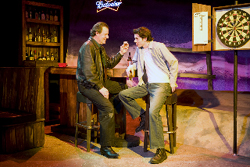 CORONADO WILL GRAB YOU BY THE BALLS

Take Ida Lupino from the Film Noir movie Road House, Barbra Stanwyck and Fred MacMurray From ‘Double Indemnity’, Lana Turner from ‘The Postman always Rings twice’, and Kathleen Turner from ‘Body Heat’ and put them all on the SF Playhouse stage and what you get is a sex-charged jolt that will sizzle your pants and tingle your jollies.

Will Springhorn Jr, plays a sleazy guy who uses lame pickup lines like: “If you were air, I’d never take another breath just to hold you in.” Springhorn is smooth, sexy and filled with ambition. Powerful acting. Stuff like that seems to work on sex-starved women that you meet at the local roadhouse bar. She’s married (Kate Del Castillo) he’s not — they are hot for each other, and plot to kill her Doctor husband. How they do it — and the aftermath, is one of the most gripping moments in the play. Castillo is terrific. Not many actresses are that great with the parted-lip sensuality. Her performance is classic.

This play is more than ‘Six Degrees of Separation.’ As the play goes on you begin to get the feeling that all of these people are connected to each other in some way. There is ‘Bobby’ “Chad Deverman” – a young man who was wounded during a war. Deverman is very believable. He brings the character to life from beginning to end. Actually, he is Brilliant. Bobby and his Dad (Bill English) don’t get along. There is mystery between the two. Bobby wants to know who is mother was – his Dad will not even give him her name. You get the feeling that it is someone that Bobby already knows. The tension between the two is explosive. English has never been better. It’s a WonderPiece of fantastic kinetic acting. These two guys, father and son are trying to show who has the biggest balls in the family. One wins and one doesn’t – and that is one of the many surprises in this mystery thriller by Dennis LeHane, (Mystic River, Gone Baby Gone’). It’s a nifty Noir trip with great dialogue.

The staging is very creative. There are nine actors on the stage. They may be seen in the same Roadhouse at the same time, but they are not actually there at the same time. Everyone is having his or her own little secrets going on – mostly involving sex. Meet the Doctor, Louis Parnell who gives a propulsive performance. He is having an affair with one of his patients, Stacy Ross. Talk about Body Heat. She burns a hole in the stage. Extremely impressive.

Then there is the flirty gertie waitress, Lorraine Olsen. There’s one in every bar, and this one is classic gal, who has seen a lot and been around the block a few times. She is wiser than you think. Also excellent are Phillip K. Torretto and Rebecca Schweitzer who help put the ‘Wow’ in this 2-hour chase around emotions. You like Jolts? O.K., Good. Cause here’s the thing. Leave your Viagra at home. You won’t need it!

The blistering, unique direction is by Susi Damilano. Hey, is Hollywood looking for a great director? If they see this — they could be waving a contract.

AT THE SAN FRANCISCO PLAYHOUSE – SUTTER AT POWELL.

What makes this production of TGI so funny, is that it is closer to truth than not. Look around, there are crooked Mayors, Postal workers that read your mail, and Crooked Magistrate’s and other Politico’s who are constantly wheedling money out of their poor subjects. Graft and greed is an everyday occurrence in this small town in Russia. And where does the money go? To keep up the towns infrastructure and schools? No, don’t be silly. It goes into the pockets of all of the above. We may laugh about what is on the stage, but it also painfully points out that we are surrounded by con artists, who are usually in high positions. What is they say in Cabaret? Money, Money, Money!

In Gogol’s time – Russia corruption was found in all forms of government. Petty Bureaucrats made a habit of pocketing money that was intended for public works. O.K. Go ahead and sing: “San Francisco, where is that Golden Gate?” Oh, I forgot it’s in your pocket. You melted it down. Well, we know one thing – they haven’t paved the roads with it.

The play exposes it all in this hilarious production as the actors give this old time jewel new life. They act crazy, but do it in a clever and inventive way that needs no laugh track. The audience provides that. In this town everyone is funny. It’s just too good to miss. Pick out your favorite public servant to laugh at. It’s the rarest of things, when a play keeps you interested throughout. And this one is it.

When Gogol’s classic political satire was first performed in Russia in 1836 the Tzar reportedly joked: “hmm, what a play! Gets at everyone and most of all at me!” This updated production uses music and physical theater to create an enormous and expansive theater experience. There is always a grotesque sense of fun to the characters.

The comic timing of the ensemble cast is amazing. There is a lot to do here – and everyone gave it their all. It is hard to single out any one actor because they were all geared up to bring us a nonstop fun ride all through all the twists and turns in this entertaining blowout from the Alistair Beaton Translated script (2005). Carey Perloff the Director had her hands full, but juggled things around to make this one of the most rewarding theater events this year.

AT THE AMERICAN CONSERVATORY THEATRE ON GEARY.

AIRWAVES EXHANGE – THE PLACE TO LEAVE YOUR TALKBACK.

I miss the gossip at the end of the reviews. MJ.
O.K. they will be back.

It is quiet. Not quite. In your review of Carrie Fisher. BT
Now will you be quiet?

Dear Lee, I just got wind of your review of Carrie Fisher’s “Wishful Drinking”. I have to say that you were wrong! The Handsome man from the audience was actually played by me…an actual handsome man in the audience. I am not part of the show nor will I ever be part of it. Although, I enjoyed my complimentary seat and hope to enjoy Carrie again. – Handsome man.
I take it back – I must have had my glasses off, you actually were not that handsome. It was a compliment, Friendo.

Send your comments to: leehartgraveshow@yahoo.com