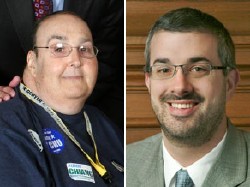 SACRAMENTO, 2:35 PM – Region 4 delegates just had their election for Regional Director, and incumbent August Longo beat San Francisco Supervisor Chris Daly by a vote of 77-28. Organized labor has been campaigning for Longo all weekend, after Daly organized his colleagues to defeat Larry Mazzola’s appointment to the Golden Gate Bridge Authority. The meeting was relatively tame, given the allegations that had flown in the past few days. “Sometimes you need to lose in order to win,” said Daly – after the vote count. He said his campaign was part of a larger struggle to change the Democratic Party, and that Howard Dean didn’t win his presidential run in 2004 but still changed the Party. “Now we have to figure out how to make change,” he said.