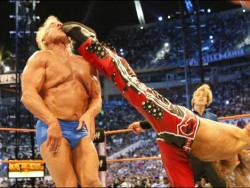 Have you seen the new TV commercial from Toyota about concussions in football? The car company brags that its research on crash safety has been turned over to the grand pooh-bahs of sports, where it now allow moms to watch their precious sons block and tackle on the gridiron with renewed confidence that the harm to them will be minimized.

When Madison Avenue jumps on the bandwagon, you know the parade is already well down the road. The year 2011 will be the one in which the American public and government confront the growing evidence of the public-health toll of violent collisions in sports and sports entertainment, and do something substantial about it. Perhaps not enough to satisfy the safety-first crowd and too much for the taste of consumers of our gladiatorial, bread-and-circuses popular culture – but something.

And to think, it’s all because of pro wrestling. In June 2007 a former World Wrestling Entertainment performer named Chris Nowinski started Boston’s Sports Legacy Institute, dedicated to study and reform of concussion prevention and management. Nowinski himself, a Harvard guy who had wrestled with an Ivy League snob gimmick, was forced to retire from the ring due to brain trauma, and then wrote a book about the phenomenon.

The same month, in one of the year’s most sensational crime stories, WWE’s Chris Benoit murdered his wife and their son, before committing suicide, in Georgia. Nowinski asked Benoit’s father, Michael Benoit, for brain tissue that could be studied by Dr. Bennet Omalu, a Nigerian-born forensic pathologist (and now chief medical examiner for San Joaquin County, California).

Mike Benoit was a grieving father grasping for answers to the unfathomable. This time the grieving father struck paydirt. Omalu found that Chris Benoit had the disease the doctor was calling “Chronic Traumatic Encephalopathy” (and that Omalu’s co-director at the West Virginia Brain Research, Dr. Julian Bailes, would like to rename “Mike Webster’s Disease,” after the Steelers’ Hall of Fame center who, like many other former football players, spiraled into mental illness, homelessness, and early death, with CTE as a major or primary factor).

In 2009 another WWE guy died, at 33, from a prescription drug overdose, and Andrew Martin’s post-mortem brain tests showed that he, too, had CTE. Benoit and Martin are just two of the scores of young wrestling deaths in the last generation, but the only ones to date whose brains have been studied.

Today the Sports Legacy Institute’s research affiliates are overflowing with a backlog of donated brains of dead athletes. Even if you’re not a sports fan, you’ve been reading the stories. And it’s almost impossible to watch a National Football League or National Hockey League game these days without hearing references to concussions and controversies over suspensions and fines under evolving rules to eliminate dangerous head shots.

The NFL faces serious political and commercial pressure to civilize its inherently brutal game – pressure that will only intensify if a labor dispute delays or cancels the 2011 season. On the legislative front, the House Judiciary Committee last year conducted highly critical hearings on the league’s concussion studies and management. One of the point people for that criticism, Pittsburgh Steelers neurologist and NFL concussion policy committee member Dr. Joseph Maroon, is also the medical director of World Wrestling Entertainment.

Meanwhile, Congressional investigations of pro wrestling, which began but stalled after the Benoit murder-suicide, should be revived following the failed $50 million self-funded Senate campaign of Linda McMahon, the wife of WWE honcho Vince McMahon, who had served as this billion-dollar publicly traded corporation’s chief executive officer. The state of Connecticut, where WWE is headquartered, is already auditing the company’s controversial classification of its performers as “independent contractors” who do not receive employee health, vacation, or pension benefits, and who sign a talent contract releasing WWE of liability even in the event of injury or death caused by the promotion’s own negligence.

When Linda McMahon’s opponent, Senator-elect Richard Blumenthal (the state’s long-time attorney general), takes office in January, he will have a moral obligation to lead on an issue that contributed significantly to his election. As Blumenthal pointed out in one of his debates with McMahon, seven wrestlers with WWE connections died just during the year-plus of her campaign. One of them, 29-year-old Lance Cade, had fatal “heart failure” two years after being savagely beaten down with a steel chair on the cable television show Raw – almost certainly contributing to his painkiller addiction and possibly causing brain damage.

The national cultural and political stars have begun to align. Listen up, everyone, and circle “concussions” and “WWE investigations” in your Google searches and Twitter hashtags. The future is now.