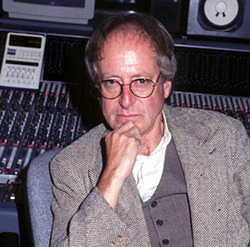 Composer John Barry was perhaps best known for composing 11 James Bond soundtracks and was hugely influential on the musical style of the 007 series, along with the general feeling of the films. I’ll never forget seeing Shirley Bassey of “Goldfinger” fame, belt out that theme at New York’s Carnegie Hall, as well as “Moonraker” and “Diamonds are Forever”. Barry’s music was so influential to me personally, that I actually recorded two of my favorites, “Walkabout” and “Zulu”.

In a career spanning almost 50 years, Barry received numerous awards for his work, including five Academy Awards; two for Born Free, and one each for The Lion in Winter (for which he also won a BAFTA Award), Out of Africa and Dances with Wolves (for which he also won a Grammy Award) and Somewhere in Time (1980) (Golden Globe Award nomination for Best Original Score – Motion Picture). Barry passed away in January, but his musical legacy will live on forever. To me, Barry was the greatest film composer of all time.

Barry was born John Barry Prendergast, in York, England in 1933, the son of a musically talented mother and a charismatic Irish father. His father, Jack Xavier Prendergast, from Cork, was a projectionist during the silent movie era who ended up owning a chain of movie theaters across northern England. Often, while watching a film, Barry would note with pen and paper, what worked or what did not. His childhood background in movies clearly influenced his music interests.

Although originally a classical pianist, Barry also learned the trumpet and grew interested in composing and arranging music. During his National Service in Cyprus, he began performing as a musician. After taking a correspondence course (with jazz composer Bill Russo) and working as an arranger for the Jack Parnell and Ted Heath’s Orchestra[, he formed his own band in 1957, The John Barry Seven, with whom he had some hit records, including “Hit and Miss”, the theme tune he composed for the BBC’s Juke Box Jury programme, a cover of the Ventures’ “Walk Don’t Run”, and a cover of the theme for the United Artists Western The Magnificent Seven.

Barry was employed by the EMI record company from 1959 until 1962 arranging or-chestral accompaniment for the company’s recording artists. From 1962, Barry trans-ferred to Ember Records where he produced albums as well as arranging them. These achievements caught the attention of the producers of a new film called Dr. No who were dissatisfied with a theme for James Bond given to them by Monty Norman. Barry was hired and the result was one of the most famous signature tunes in film history, the “James Bond Theme”. When the producers of the Bond series engaged Lionel Bart to score the next James Bond film From Russia with Love, they discovered that Bart could neither read nor write music. Though Bart wrote a title song for the film, the producers remembered Barry’s arrangement of the James Bond Theme and his composing and arranging for several films with Adam Faith. Lionel Bart also recommended Barry to producer Stanley Baker for his film Zulu.

This was the turning point for Barry, and he went on to become one of the most cele-brated film composers, winning five Academy Awards and four Grammy Awards, with scores for, among others, The Lion in Winter, Midnight Cowboy, Born Free, and Some-where in Time. Barry was often cited as having had a distinct style which concentrated on lush strings and extensive use of brass. However he was also an innovator, being one of the first to employ synthesizers in a film score (On Her Majesty’s Secret Service), and to make wide use of pop artists and songs in Midnight Cowboy. Because Barry provided not just the main title theme but the complete soundtrack score, his music often enhanced the critical reception of a film, notably in Midnight Cowboy, King Kong, Out of Africa, and Dances with Wolves.

One of Barry’s best known compositions is the theme for the 1971 TV series The Per-suaders, in which Tony Curtis and Roger Moore were paired as rich playboys solving crimes. The theme went on to be a hit single in some European countries and has been re-released on collections of 1970s disco hits. The instrumental recording also features Moog synthesizers.

Barry’s work also began to be sampled in the 1990s by artists such as Dr. Dre and Wu-Tang Clan, with his “James Bond Theme” being sampled by performers as diverse as Bonobo, Gang Starr and Junior Reid. Fatboy Slim used the opening guitars from “Beat Girl (Main Title)” for “Rockafeller Skank” from his 1998 album, You’ve Come A Long Way, Baby. The Sneaker Pimps also sampled “Golden Girl” on their 1996 single “6 Un-derground”. Additionally, “You Only Live Twice” was heavily sampled on “Millennium” from Robbie Williams’ second album, I’ve Been Expecting You. (I did much the same on the aforementioned Walkabout and Zulu films).

After the success of Dr. No, Barry scored eleven of the next 14 James Bond films (but with Monty Norman continually credited as the composer of the “James Bond Theme”). In his tenure with the film series, Barry’s music, variously brassy and moody, appealed to film aficionados. For From Russia With Love he composed “007”, an alternative James Bond signature theme, which is featured in four other Bond films (Thunderball, You Only Live Twice, Diamonds Are Forever, Moonraker). The theme “Stalking”, for the teaser sequence of From Russia With Love, was covered by colleague Marvin Hamlisch for The Spy Who Loved Me (1977). (The music and lyrics for From Russia With Love’s title song were written by Lionel Bart, whose musical theatre credits included Oliver!). Barry also (indirectly) contributed to the soundtrack of the 1967 spoof version of Casino Royale: his Born Free theme appears briefly in the opening sequence.

In Goldfinger, he perfected the “Bond sound”, a heady mixture of brass, jazz and sen-suous melodies. There is even an element of Barry’s jazz roots in the big-band track “Into Miami”, which follows the title credits and accompanies the film’s iconic image of the camera lens zooming toward the Fontainebleau Hotel in Miami Beach.

As Barry matured, the Bond scores concentrated more on lush melodies, as in Moon-raker and Octopussy. Barry’s score for A View to a Kill was traditional, but his collabora-tion with Duran Duran for the title song was contemporary and one of the most successful Bond themes to date, reaching number one in the United States and number two in the UK Singles Chart. Both A View to a Kill and the Living Daylights theme by a-ha blended the pop music style of the artists with Barry’s orchestration. In 2006, a-ha’s Pal Waaktaar complimented Barry’s contributions “I loved the stuff he added to the track, I mean it gave it this really cool string arrangement. That’s when for me it started to sound like a Bond thing”. Barry’s last score for the Bond series was 1987’s The Living Daylights, Dalton’s first film in the series with Barry making a cameo appearance as a composer in the film. Barry was intended to score Licence to Kill but was recovering from throat surgery at the time and it was considered unsafe to fly him to London to complete the score. The score was completed by Michael Kamen. Arnold also went on to score the subsequent Bond films: The World Is Not Enough, Die Another Day, Casino Royale and Quantum of Solace.

David Arnold, a British composer, saw the result of two years’ work in 1997 with the re-lease of Shaken and Stirred: The David Arnold James Bond Project, an album of new versions of the themes from various James Bond films. Arnold thanks Barry in the sleeve notes, referring to him as “the Guvnor”. Almost all of the tracks were John Barry compositions, and the revision of his work met with his approval ‚Äì he contacted Barbara Broccoli, producer of the then upcoming Tomorrow Never Dies, to recommend Arnold as the film’s composer.

Sole compositional credit for the “James Bond Theme” is attributed to Monty Norman, who was contracted as composer for Dr. No. Some 30 years later, in 2001, the disputed authorship of the theme was examined legally in the High Court in London after Norman sued The Sunday Times for publishing an article in 1997 in which Barry was named as the true composer; Barry testified for the defense. In court, Barry testified that he had been handed a musical manuscript of a work by Norman (meant to become the theme) and that he was to arrange it musically, and that he composed additional music and arranged the “James Bond Theme”. The court was also told that Norman received sole credit because of his prior contract with the producers. Barry said that a deal was struck whereby he would receive a flat fee of ¬£250 and Norman would receive the songwriting credit. arry said that he had accepted the deal with United Artists Head of Music Noel Rogers because it would help his career. Despite these claims the jury ruled unanimously in favour of Norman. On September 7th, 2006, Barry publicly defended his authorship of the theme on the Steve Wright show on BBC Radio 2.

On June 20th, 2011, The Royal Philharmonic Orchestra will perform a tribute to the late composer to celebrate his life and work. Many of his colleagues from the James Bond franchise will be in attendance, including, Dame Shirley Bassey and Sir George Martin. The event is sponsored by The Royal College of Music through a grant by the Broccoli Foundation. John Barry left behind a musical legacy that will never be surpassed or even rivaled and a look at his list of films staggers the mind. From the brassy textures and orchestra hits, the tension filled, cold war sounds of a hammer dulcimer to the poignant trills of flutes set against an African desert, John Barry’s music will leave a mark that will indeed live on and endure the test of time. His talent was truly timeless.

E. “Doc” Smith is a musician and recording artist with Edgetone Records and has worked with the likes of Brian Eno, Madonna, Warren Zevon and Mickey Hart among others. He is also the inventor of the musical instrument, the Drummstick. He can be reached at http://edgetonerecords.com/edoctorsmith