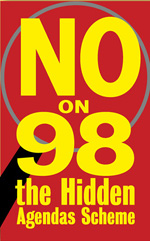 With no presidential primary on the statewide ballot, voter turnout in June is expected to be abysmal. Which means that Proposition 98 – the extreme right-wing measure to abolish rent control, basic tenant protections, environmental regulations and water laws – could actually pass. But with term limits forcing many state legislators out of office, there will also be a number of competitive June primaries – creating the potential to drive up voter turnout in the state’s more progressive pockets. If Democratic candidates for Assembly and State Senate make the defeat of Prop 98 a central part of their campaign, they could help it go down in flames. Candidates who mobilize to defeat it would also benefit – as it will help them connect more strongly with the Democratic voters in their district.

“Prop 98 is a terrible initiative, and I will campaign against it loudly,” said Barbara Sprenger, who is running in the 27th State Assembly District (Santa Cruz and Monterey.) By re-defining “private use” to include when a public agency takes over natural resources, Prop 98 threatens to undermine any public water project in the state. “I’ve helped organize my community in opposing higher water rates from private water companies,” said Sprenger. “Prop 98’s effect would be devastating.”

“I expect to have ‘No on 98’ on all my campaign literature,” said Kriss Worthington, who is running in the 14th State Assembly District. “It seriously questions our environmental policies, and is a very blatant attack on affordable housing and rent control.” As a current member of the Berkeley City Council, Worthington sponsored a resolution to have the City oppose it – and organized a press rally in November to draw some media attention. He also will encourage voters to support Prop 99 – a competing measure that deals with eminent domain – as a “far more reasonable alternative.”

Sprenger and Worthington are both running in competitive races – in heavily Democratic districts where constituents are likely to oppose Prop 98. But unless voters in these areas turn out, Prop 98 could pass statewide – so the burden is on local candidates to make its defeat a rallying cry. “Prop 98 is horrible,” said Nancy Skinner – who’s running against Worthington in the 14th A.D. – “and it’s a worse poison pill than the last initiative [i.e., Prop 90] that we defeated. I will have it in my campaign materials, and I will speak out against it at every opportunity.” If competing candidates make a point of it when they boost their own campaign, they can ensure a healthy progressive turnout.

In San Francisco – where Mark Leno and Carole Migden are locked in a bitter race for the State Senate – the two candidates jointly appeared at a rally last November to defeat Prop 98. I had previously written that having Leno and Migden run against each other could help progressive measures pass in San Francisco. To defeat Prop 98, we’ll need similar efforts elsewhere.

Gina Papan and Richard Holober are running against each other in the 19th Assembly District (San Mateo County.) Both oppose Prop 98, because it hamstrings the ability of local government to advance solutions. “I believe that it goes way too far,” said Papan, who currently serves as Mayor of Millbrae. “I will be working to help defeat it in my campaign.” Holober’s campaign manager said that the candidate “doesn’t think that the state should dictate and tell localities what to do – and he opposes Prop 98.”

I spent much of last week calling many Democratic candidates throughout the state to see who would go on the record opposing Prop 98 – and whether they plan to make it a big part of their campaign. Many were vague about how they expect to do so (most are just kicking off their campaign right now), but a few were happy to talk about how their background made it important to defeat Prop 98.

“I’m a renter myself,” said Anna Song, who’s running in a competitive race for the 22nd Assembly District in Santa Clara. “It’s really important for renters to have a certain level of stability, and Prop 98 would take that away.” Before running for public office, Song worked for Project Sentinel – a non-profit in the South Bay that assists tenants and low-income homeowners – so has encountered this issue first-hand.

A spokesman for Mariko Yamada – who’s running in the 8th Assembly District in West Sacramento – talked about the candidate’s firm commitment to rent control. “She’s a social worker by training,” he said, “and is very sensitive to the needs of mobile home park residents in the district. Gentrification has been pushing a lot of people out, and we’ve been working closely with grassroots organizers on these issues.”

Many of these candidates didn’t even know they were running until February 5th – when the defeat of Prop 93 termed out a lot of state legislators, opening up the chance for Democrats to run in the June primary. As a result, a lot of them have been late in writing their campaign strategy – and some were even unsure about Prop 98 when I first brought it up. “I need to get more educated first,” was a common response I got from a lot of them.

But now is the time to put them on record – while they’re still introducing themselves to their district – and ask them to campaign against Prop 98. Because only with competitive races that generate a high Democratic turnout – and an emphasis on the devastating impacts of Prop 98 – will we ensure that affordable housing, environmental protection, rent control and water rights are protected in California.

And who knows? Maybe we’ll get a more pro-tenant state legislature when it’s all over.