Commemorating the End of the War in Viet Nam 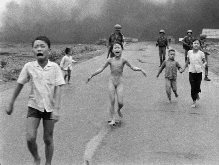 On Tuesday, April 30, we commemorate the 38-year anniversary of the end of the Viet Nam War. Let us not forget this war but strive to learn the lessons from it. During the war, my father, a former diplomat and professor, yearned for peace in his homeland of Viet Nam. My mother, who had not seen her parents and siblings for decades, also prayed for peace. Since 1975, when the war ended, we have witnessed the spirit of reconciliation between Viet Nam and the U.S. and normalization of relations. But some still debate who was the victor and who the vanquished.

A decade ago, some immigrants within the Vietnamese-American community argued vehemently over the loss of their country — mat nuoc (literally, “loss of country”) — while the term giai phong (“liberation”) was commonly used to mark the end of the war. The strong passions have been diluted with the passage of time, but they remain etched in our memory.
Certain facts left their mark: More than 58,000 American troops died. Millions of Vietnamese troops from all regions of Viet Nam were killed. More than 3 million Vietnamese children and adult civilians perished. Millions more were left widowed and orphaned.

The U.S. bombing in Viet Nam was about four times greater than the total bombing of Germany in World War II. U.S. use of napalm and herbicides in Viet Nam scarred the landscape. The defoliant Agent Orange resulted in human deformities and cancers that will linger for generations.
Atrocities were perpetrated by troops on all sides. The destruction of entire villages left a war-ravaged landscape. The photo of the young girl running naked along the country road, her body burned with napalm, still sears our memories.

The U.S., too, was scarred by the war, its idealism tarnished by the anti-communist propaganda that fueled the conflict. For the people of both countries, there has been a need for healing since 1975.
Today, the Vietnamese people are enjoying the normalcy of a nation free of war and a higher standard of living. Vietnam’s natural beauty, rich culture and friendly people make it one of the top 20 travel destinations in the world. It is a strong developing economic power in Asia.

But challenges remain. The conflicts between Vietnam and China over the Spratly Islands have intensified recently, reminding us of the threat of war looming over this region, which is rich in oil and gas. The U.S. military now is using Viet Nam’s ports to anchor Navy ships.

Viet Nam must be careful as it develops as an economic tiger. There is evidence that rapid economic growth has resulted in environmental degradation, including marine and air pollution. Viet Nam must address these problems seriously.

For me, the main lesson of the war was best stated by former Sen. George McGovern, who said: “I don’t know anybody alive today that thinks the war in Viet Nam was a good investment for the U.S. It weakened us militarily. It weakened us economically. It weakened us morally. We went against our moral principles when we were carpet bombing a little country like Viet Nam.”

Let us not send young men and women abroad to kill and to be killed in the name of some misguided foreign policy. Let us reclaim our belief in the sanctity of human life, and turn swords into plowshares. As human brothers and sisters, we deserve to live in peace.