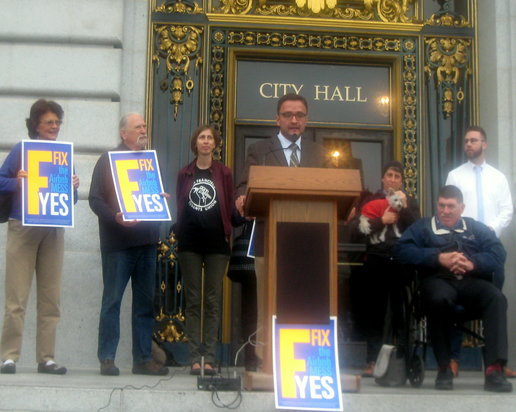 Prop F supporters rallied at City Hall yesterday prior to a Supervisor’s hearing on a new city agency’s enforcement of San Francisco’s short-term rental law. Critics challenged the only nine violations the agency has prosecuted, arguing that the housing crunch is being exacerbated by the allocation of thousands of resident housing units into short-term rental (STR) space for tourists.

STRs are defined by law as less than 30-day rentals, ostensibly to distinguish them from long-term residential housing.

Yet, the city found that about 15% of vacant residential units are off the long-term rental market, now being used by Airbnb, a vacation rental listing website valued at $25 billion with 1.5 million national listings and growing.

Compounding the problem is that dozens more rental-listing websites like Craigslist and VRBO (Vacation Rental by Owner) are doing the same thing in San Francisco.

Of course, depletion of residential housing only leads to more price inflation of the remaining stock and deeply impacts the costs of those seeking to live in the city permanently.

Not surprisingly, therefore, “housing is the number one issue in every poll,” reported Gabriel Metcalf, president and CEO of public policy research company SPUR.

And for good reason.

The most recent statistics from August indicate San Francisco continued its reign as the most expensive city in the country by a wide margin. The median rent for a one-bedroom hit a new record high at $3,530, up 13.9 percent over August 2014.

In addition, while the city added 6,559 affordable housing units between 2004 and 2014, the Housing Balance Report shows that 5,470 apartments were removed during the same period from rent-control “protected status” through a variety of “no fault” evictions.

For Prop F backers, this is a crisis.

As a result, there are five propositions on the November city ballot that directly address housing. They range from affordable housing bonds, a moratorium on market-rate construction in the city’s Mission District, housing developments on surplus public lands and a specific development proposal on the waterfront.

And then, there is Prop F, one of the most controversial.

Airbnb, for its part, has thrown $8 million into high-pitched attack ads accusing Prop F supporters of “Big Brother” spying on neighbors and turning them into authorities just for trying to earn a little more cash from renting out rooms.

Actually, Prop F is quite simple. It calls for registration with the city of all short-term rental (STR) listings. A fine on the listing websites would be imposed for failure to do so.

This would be new because so far, affordable housing activists assert, there has been exceedingly little monitoring of vacation rental websites like Airbnb.

And, as a result of the city turning a turning a blind eye, housing advocates tell me, it has dramatically spurred the rapid expansion of STRs and subsequent depletion of housing units normally reserved for permanent residents.

For example, current law already requires STR hosts to register with the city, but only 618 have done so, according to the San Francisco Planning Department.

Yet, a San Francisco Chronicle investigation revealed that Airbnb had 4,238 local hosts with 5,459 listings. VRBO and others also had hundreds more listings on their sites.

The vast number of STRs, it would appear, were unreported with their actual impact on the residential housing squeeze going both unnoticed and unregulated by authorities.

Buttressing these concerns further, the San Francisco Chronicle report also indicated there were “at least 350 cases of entire homes” being listed for year-round vacation rental “bolstering claims by activists that the service removes scarce housing from the city’s limited inventory.”

It’s true, Tess Welborn, from the Haight-Ashbury Neighborhood Council told me in a conversation, “and none of this is legal.” She described how under current law, it is neither legal to rent vacation units full time nor legal for websites to list STRs without them being registered with the city.

Airbnb is Too Big to Fail

Trying to put all the pieces together so that is understandable, speakers at the Prop F press conference like SF Planning Commissioner Dennis Richards explained that making a few bucks off “home sharing to tourists is not intrinsically bad.”

And, as others explained, Prop F supporters do not want to go after individuals who host tourist guests but rather hold accountable the several dozen corporate rental-listing websites making large commissions who flagrantly refuse to register their transactions.

But, at the same time, Commissioner Richards emphasized, there comes a point when renting out residential living spaces to temporary visitors begins to displace “permanent housing availability.”

And this, he said, should get all our attention.

This is particularly true when large commercial property owners buy apartment buildings and evict long-term tenants in order to rent STRs day to day to tourists.

Of course, the big incentive is dollars.

Jennifer Fieber, from the SF Tenants Union, told me that STR daily rental charges average much more than the normal pro-rated amount for rent-control protected tenants, for example.

And thus, this explains the accelerated eviction rate for these tenants and the conversion of the units into STRs.

Amazing, and even gluttonous, that more profit can be made off short-term rentals to tourists than is already being made off residents suffering from such incredible rent inflation in the city.

Essentially, Sara Short from the SF Housing Rights Coalition said, Airbnb is a business model “that profits off our housing crisis” and, added Campos, they do it by dodging “normal business regulatory restraints.”

So, clearly, concerns about Airbnb practices are all around us. Yet, where’s the enforcement?

Business is Good, Leave Us Alone

“That’s the whole point of Prop F,” Conny Ford, VP Community Affairs, San Francisco Labor Council, AFL-CIO, told me. “It will hold Airbnb and other listing websites accountable” and allow us time to plan how to stop the unparalleled further displacement of residents.

But, housing activists have grown tired of the city’s failure to enforce existing laws while Airbnb impact has worsened the city’s housing crisis.

So far, Jennifer Fieber, SF Tenants Union, told me, we only know of around a few dozen cases of the “city enforcing its own laws already on the books.” True, it was only in July that Mayor Lee ordered the creation of a new enforcement office and then it only acted by sending violation letters to 15 hosts.

“This is a drop in the bucket, we need Prop F’s reasonable registration rules so we can keep tabs on the number of units being rented,” Ford insisted.

The city’s own Planning Department seemed to agree there were problems with current rules when it concluded that it was “impracticable to determine whether or not a host is in their unit on any given night [as legally required]. As a result, if incentives exist [profits], a host may fully withdraw the unit from the residential market and use it for STR on a full-time basis, potentially up to every night of the year.”

These are the identical problems housing advocates have been pointing out and it is why they have proposed the stiffer controls of Prop F.

Carl Finamore is Machinist Lodge 1781 delegate to the San Francisco Labor Council, AFL-CIO. He can be reached at local1781@yahoo.com