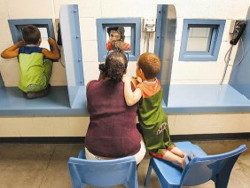 Type “California” into a Google news search and chances are good that your browser will turn up headlines about prisons. Since October 1, 2011 the state has started to deliver on a mandate from the U.S. Supreme Court to remove 33,000 people from its bloated prison population. In this fast and furious process called realignment, it is easy to forget a crucial population: children. The majority of incarcerated people in California are parents. As described in my last post, realignment offers enormous opportunity to change the status quo corrections practices as non-sexual, non-violent, and non-serious offenders will now be sentenced to serve in county jails. Can children benefit from it?

Children are the collateral damage of corrections systems. Since 1991, the number of children with a mother in prison has increased by more than 131 percent. Nationwide, half of children whose mothers are incarcerated are under age ten and at high risk for entering foster care systems. The majority of parents in state prison — 54 percent of fathers and 73 percent of mothers — are convicted of non-violent offenses, including drug and property offenses.

“When a parent is locked up in jail or prison … the impact on … children is traumatic,” notes Tanya Krupat, director of the New York Initiative for Children of Incarcerated Parents. “Many of the children, particularly of incarcerated mothers, end up in foster care. They may endure shame and humiliation, face an increased risk for developing mental health problems, experience school failure or drop out.”

Despite fears from corrections officials and many of California’s “tough on crime” politicians that realignment will increase crime, most potential benefits of realignment match the needs of children. Three issues relating to realignment will hopefully better the experience of these children. First, those incarcerated will likely be closer to their families. Second, California is implementing reentry programs specifically geared to grant early release for women, most of whom have children. Finally, financial hardship will hopefully force counties to implement low-cost alternatives to jailing that take children’s needs into account.

The Bureau of Justice Statistics reports that, nationwide, more than half of prisoners with children live more than 100 miles from where they lived before prison. Given that they usually come from poverty, their families typically cannot afford the costs of travel. The running hypothesis among advocates is that detaining individuals closer to home will lower costs of visiting and allow parents and children more contact. However, the solution is not quite so simple. County jails were not designed to house inmates for long periods and are therefore less equipped than state prisons to accommodate visitors; they frequently lack a physical space for families to meet. Jails will need to rise to the occasion if children are to benefit from being closer to their parents.

In addition, California has developed an early release program for women. Nineteen thousand California children have mothers convicted of non-violent offenses, and the disproportionate impact of realignment on female prisoners heightens the need to support women leaving the system. The program is based on a 2010 Washington State bill, SSB 6639, which created alternatives to prison confinement for some non-violent offenders who are parents. The sponsor of California’s alternative realignment program for women, State Senator Carol Liu (District 21), says that her goal is to reunite families and save money by decreasing recidivism. Currently, it costs an average of $49,000 per year to house an adult in state prison. Liu’s prediction of cost-savings is most likely correct since research suggests that visitation significantly increases parent-child attachment, perhaps the mechanism for demonstrated decreases in recidivism.

As of October 2011, roughly 9,500 California women fell into the “non-non-non” category, a prerequisite for the new program. In order to enter the alternative release program, however, qualified women must prove that they have secured housing for themselves in treatment facilities, transitional houses, or their own homes.

Advocate Karen Shain, Policy Director with Legal Services for Prisoners with Children, worries that the program sets women up to fail. Most face enormous obstacles. Wendy Still, San Francisco County’s chief of probation, notes that approximately 85 percent of her female client population has suffered either physical or emotional abuse, frequently from intimate partners, and rarely have stable homes to which they can return. It is no surprise, then, that although thousands qualify for the alternative release program, only 20 women were eligible as of last October.

Some counties have modeled other programs for mothers that could ease the reentry process under realignment. However, Barry Krisberg, criminal justice expert and a Director of Research and Policy at UC Berkeley school of law suggests that these programs “will work well in some places [where] you have a critical mass of people that want to innovate: prison less, community more. But there’s just a dozen of them at the best.” Yali Lincroft, children’s policy consultant for First Focus and Annie E. Casey Foundation, concurs. She says that the benefits of realignment hinge on whether county jails and services will not just have less incarceration but supplant it with programs like parenting classes, housing assistance, and substance abuse training.

San Francisco County has done a good job. It has created groundbreaking programs such as One Family and Parenting Inside Out, both run by the non-profit Community Works. The former offers parent/child contact visits to every eligible parent incarcerated in San Francisco’s County Jails; the latter runs a parent education program designed specifically for incarcerated men and women.

According to Lincroft, this program also tapped into GED funding streams to the jail and solicited private contributions from the Zellerbach Family Foundation. Collaboration between county, city, and non-profit services will allow counties to use AB 109 funds efficiently and creatively. Unfortunately, budget constraints mean that even in a county devoted to reentry support these programs have a very uncertain future. (It’s important to note the compounding impact of programs serving this population of children. On January 8, Governor Brown mimicked former Republican Governor Arnold Schwarzenegger’s 2008 budget cut strategy when he proposed deep cuts to the California Healthy Families Program. This change could devastate almost a million children, including many children of incarcerated parents.)

In Lincroft’s handbook for social workers, When a Parent is Incarcerated, she describes the ways in which profound harm occurs when social services and police fail to coordinate. A parent’s arrest can result in traumatizing exposure to the arrest, interrogation by police, or being left unattended and staying on their own, even caring for younger siblings, until noticed by neighbors or teachers. They are at risk of being placed unnecessarily in the foster care system because no one arranged for a family member or friend who to care for them.

California is strapped for cash, but this is no excuse for poor practices. Counties can spend little to no extra funds and still make a huge impact by betting social services’, corrections’, and law enforcement’s practices around children of systems-involved parents. Improvements should include:

* Developing arrest protocols with police and probation departments when children are present at the time of parental arrest in order to reduce trauma and harm to children and unnecessary involvement with the child welfare system;

*Providing parents a mandated period of time to arrange childcare when law enforcement arrests them or orders “flash incarceration” (a new policy that enables parole and probation violators to be detained for up to ten days).

Finally, Governor Brown’s recent announcement that he plans to cut the corrections budgets by $1 billion might be a blessing. Counties can currently choose to spend AB 109 funds on prison construction rather than community-based programs, but Brown’s plan contains a clause allowing the state to halt prison construction. He can make good on his intentions to better corrections if he incentivizes reentry support and makes state funds contingent on family-supportive policies. These moves make sense. It is rare, though, that corrections systems — let alone a California governor — examines itself through the eyes of a child. I hope this is one of those times.

This piece was first published at the blog Sense and Sustainability.