Clinton Lies About Having Opposed the War 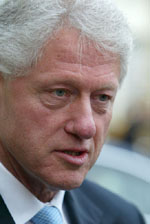 If you think we can trust Hillary Clinton on Iraq, consider what her husband said this week while campaigning in Iowa. Former President Bill Clinton claimed to have opposed the War “from the beginning,” but that it was inappropriate for him at the time to criticize a president’s military decision. For Clinton to say this now reeks of pandering to help his wife win over skeptical Democrats, and is laughable on its face. Not only did Hillary vote for the 2002 Iraq War Resolution, but Bill made explicit statements on the eve of the invasion showing his support. As late as 2004, he even told CNN he had “repeatedly defended George Bush against the left on Iraq.” Criticizing a sitting President didn’t stop Al Gore from opposing the War – nor did it stop George Bush Sr. from attacking Bill Clinton’s foreign policy. Are the Clintons playing a Joe Lieberman strategy to pull the wool over the eyes of Democrats?

There’s no question that Hillary Clinton’s hawkish complicity in an illegal, immoral and unjustifiable War could sink her nomination. Barack Obama has reminded voters that he opposed the War from the start – like most activists in the Democratic Party, as well as many politicians like Al Gore and Howard Dean. While John Edwards voted for the 2002 Resolution, unlike Hillary he has repeatedly apologized for it – and of the three major candidates has been the most forceful about getting us out. Democrats want to like Hillary, but this inconvenient truth is what’s keeping many of them from supporting her.

It is flat-out dishonest for Bill Clinton to assert that he had always opposed the War, although he acknowledges that he supported the 2002 Senate Resolution. Clinton explained that he just didn’t support the invasion. But on March 18, 2003 – two days before the War started – Bill Clinton gave a commencement speech at Tougaloo College in Mississippi where he said, “I supported the president when he asked for authority to stand up against weapons of mass destruction.” We all knew at the time that Bush was ready to invade Iraq at a moment’s notice, and words like that would only embolden him.

On the same day, Bill Clinton wrote an op-ed in the UK Guardian called “Trust Tony’s Judgment,” where he urged Britons to get behind Tony Blair’s support for the War. “There is,” he said, “some risk of Saddam using or transferring his weapons to terrorists. There is as well the possibility that more angry young Muslims can be recruited to terrorism. But if we leave Iraq with chemical and biological weapons, after 12 years of defiance, there is a considerable risk that one day these weapons will fall into the wrong hands and put many more lives at risk than will be lost in overthrowing Saddam.” He clearly supported the Invasion, and its propaganda.

As the War progressed, and more American and Iraqi lives were lost, Bill Clinton wrote his memoirs. When the book was published in 2004, he went on CNN to say, “I have repeatedly defended George Bush against the left on Iraq.” Bear in mind that this was long after the President recklessly told Iraqi insurgents to “bring ‘em on” and attack our troops. The “left” who was fighting Bush on a daily basis and marching in the streets could have used some defending from the former President who everyone is now so nostalgic about. Instead, he was busy marginalizing us.

But now Clinton wants us to believe that he was one of us – that he opposed going to War in Iraq, but that it would not be appropriate for someone of his stature to criticize a sitting President’s military policy. That didn’t stop his former Vice President – Al Gore, the man who really did win the White House in 2000 – from giving an eloquent speech in September 2002 against the rush to invade Iraq. Other prominent Democrats like Ted Kennedy and Jimmy Carter were opposed from the get-go, and did not hesitate to publicly criticize our Commander-in-Chief in time of war.

Moreover, it’s not like Bubba’s White House predecessors gave him the same courtesy. In May 1994, according to the Associated Press, former President George Bush criticized Bill Clinton’s foreign policy at a Milwaukee fundraiser. “I feel our leadership around the world is being eroded by stop-and-start policies of hesitancy,” said the former President. “In foreign affairs, you have to set a goal, set a course and stick with it.” Bush Senior even went so far as to say he had been a better President than Bill Clinton.

It should be clear to anyone why Bill Clinton is lying about where he stood on Iraq. Iowa Democrats strongly oppose the War, but they are also nostalgic about a time when we had a President who wasn’t called George Bush. They are skeptical about the Clintons on Iraq, but if Bill can tell them that it’s okay because he’s always been opposed to the War, they will allay their fears and vote for Hillary. Even if it involves blatantly lying, and relying on the hazy memory of voters.

In 2006, Senator Joe Lieberman was in a tough re-election fight against Democrat Ned Lamont because of the same problem – his support for the War in Iraq. So he pulled a cynical strategy to win the general election: in the waning days of the campaign, he just pretended to be one of us. “Nobody wants to end the War in Iraq more than I do,” said Lieberman, as he channeled – sometimes explicitly – the same words that Richard Nixon told voters when another unpopular War was raging on.

Iowa voters are likely to hold the key as to who will be our Democratic nominee. They can either seal the deal for Hillary’s juggernaut, or send a loud message by picking either John Edwards or Barack Obama. The Clintons know that, and they’re doing everything they can to make sure that the gate-crashers don’t give the party back to the people who now oppose this War. Even if it means bringing back Slick Willie to lie to voters who are sick of this immoral quagmire and want to bring our troops home.

I only hope that Iowa Democrats are smart enough to see through this stuff.