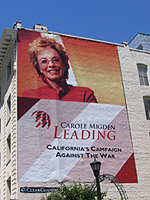 Back in March, I reported that Michael Colbruno – State Senator Carole Migden’s former chief of staff – is now V.P. of Government Affairs for Clear Channel Outdoor, the massive billboard company. Whenever Colbruno wants to help his old boss, he makes sure the City gets plastered with campaign billboards for election season. Today, the San Francisco Municipal Transportation Authority (M.T.A.) will vote on whether to give Clear Channel an exclusive contract to advertise on all 1,100 Muni bus shelters throughout the City, just in time for Carole Migden’s tough re-election fight.

But Clear Channel isn’t waiting for the Muni contract to help her campaign. Last week, the company set up huge billboards throughout the district, proclaiming that Migden is “leading California’s campaign against the War.” Migden has always opposed the War in Iraq, but to say that she has led California’s campaign demeans members of Congress like Barbara Lee, Maxine Waters and Lynn Woolsey who represent California and have led the charge since Day One. Carole Migden may have authored a resolution in the State Senate last January to oppose George Bush’s escalation. But ironically, it was her opponent, Mark Leno, who sponsored the very first resolution in the nation against the Iraq War – in October 2002.

On October 10, 2002, the U.S. House of Representatives passed the Iraq War Resolution, giving George Bush carte blanche to invade the country based on “weapons of mass destruction.” But three days earlier, the San Francisco Board of Supervisors adopted a resolution urging Congress to oppose such military action. Sponsored by then-Supervisor Mark Leno, San Francisco became the very first City government to go on record opposing the War. Tony Hall and Gavin Newsom were the lone dissenters.

At the time, Carole Migden was in the State Assembly – but there was no such action taken in the state legislature to oppose the War. Now she claims to be “leading California’s campaign” against the War. Her only evidence is that in January 2007, Moveon.org approached her to get the State Senate on record opposing George Bush’s proposed escalation of the conflict. As a State Senator, Migden authored the Resolution, as did Mark Leno who sponsored a companion motion in the Assembly.

But if Migden has been leading the campaign against the War, what has she done in the past four years about it? While Migden was on the state Board of Equalization from 2002 to 2004, she has been a State Senator for the past two-and-a-half years. Two years ago, Assemblyman Jerome Horton sponsored a resolution urging that Congress withdraw from Iraq “no later than December 31, 2005.” Migden was nowhere to be found.

By claiming to lead California’s campaign against the War, Migden has minimized the work that members of California’s Congressional delegation – including the two who ironically represent her State Senate District – have done to oppose this War. In 2002, San Francisco’s Nancy Pelosi broke away from the party leadership and lobbied the Democratic Caucus to vote “no” on the Iraq War Resolution. In January 2005, Lynn Woolsey of Marin County became the first member of Congress to support withdrawal.

In fact, most of the members of Congress who have led the charge to end the War in Iraq are from California. In September 2006, Maxine Waters of Los Angeles sponsored a resolution to repeal authorization of the War. In June 2005, eight members of Congress – including Woolsey, Waters and Barbara Lee of Oakland – founded the Out of Iraq Caucus. Today, that Caucus has a healthy California membership, including Pete Stark, Xavier Beccera, Lois Capps, Sam Farr, Bob Filner, Mike Honda, George Miller, Grace Napolitano, Lucille Roybal-Allard, Linda Sanchez, Hilda Solis and Diane Watson.

The Clear Channel billboards are clearly identified as belonging to the company, but do not disclose if Migden’s re-election campaign paid for them. But the billboards include the same photo, campaign logo and campaign slogan that Migden has used on her official campaign website — which at least raises issues about “co-ordination.”

With Migden’s relationship with Colbruno, it’s no surprise that Clear Channel will display her likeness throughout the district. Not only does Clear Channel do this for Migden, but they also do it for other candidates who are protégés of the State Senator when she lets Colbruno know that it’s important. Such examples are Harry Britt’s Assembly race in 2002, and Chris Daly’s re-election fight in 2006. If Muni approves the Clear Channel contract today, expect to see these ads on bus shelters soon.

But what’s fundamentally dishonest is when the billboards claim that Carole Migden is “leading” the way for California against the War in Iraq. Because this demeans the work that many other legislative leaders in the Golden State have taken to bring our troops home. Migden may have been a good vote on this issue, but she’s not a “leader.”

EDITOR’S NOTE: As a private citizen, Paul Hogarth has endorsed Mark Leno for State Senate. He does not play an advisory role in the campaign, and saw the billboards himself without a “tip” from the Leno campaign. Send feedback to paul@beyondchron.org