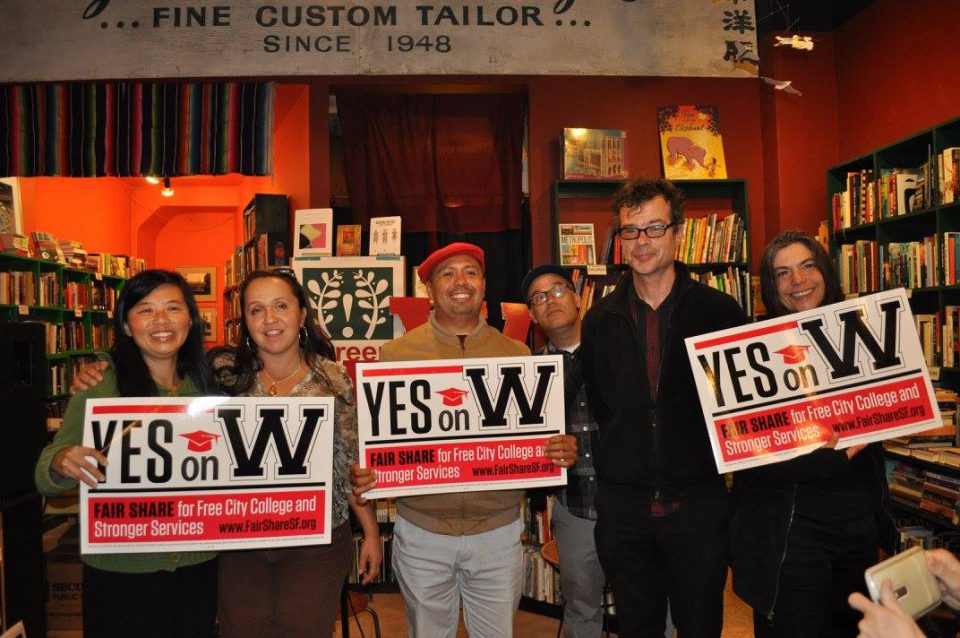 The value of City College of San Francisco is often stated in economic terms. Those who graduate with an Associate of Arts Degree generally earn $10,000 more than those people with only a High School Diploma.  The College’s long list of certificate programs have launched many into living wage employment.. Overlooked is City College’s massive contributions to culture. The college houses the Diego Rivera Pan American Unity mural. Alumni include the actor Danny Glover, author Sapphire, sculptor Manuel Neri and comedian Pat Paulson.

On Tuesday October 11th, students, alumni and faculty of City College gathered at the Green Arcade Book Store to celebrate this history and build support for Proposition W on the November 8th ballot. Proposition W is a critical piece in the campaign to make the college tuition-free again, as it was up until 1983.  This is accomplished by a slight increase in property transfer fees over 5 million dollars. In short, working-class San Franciscans will win big if W passes. Those who can afford ultra-luxury property will pay just a little bit more.

Poet and City College Instructor Benjamin Bac Sierra (Barrio Bushido) read two poems about the “other” San Francisco. One was a tribute to his friend Alex Nieto, fatally shot by the police in 2014. Nieto was a City College student. Said Bac Sierra, “We need City College for people like me. I wouldn’t be here if it weren’t for City College. “

Alumni Ananda Esteva’s (Pisco Sours) parent’s attended City College soon after they fled the Pinochet regime in Chile. Esteva explained that her parents were able to attend the college at a time when it was tuition free. Her father Waldo, is now a world-renown sculptor and her mother gained the education necessary to provide a decent living for a young family. Esteva’s work encompassed pieces of San Francisco of yesterday evoking the Mission District’s Latino heritage and the struggle of raising a child in the era of Black Lives Matter.

Marina Lazzara (Everything, Everyday Mostly) described how the resources of City College have always been there for her at various points and turns in her life. Lazzara earned a certificate in Nutrition from City College which has allowed her to make a living, raise a child and pursue artistic and political passions.

Author and publisher Joe Donohoe (Specious Species) doesn’t like sleep much. Attending City College allowed him to eventually earn a Master’s in Nursing while he was also driving a cab in San Francisco. Donohoe read a piece about his first nursing job as a discharge nurse at San Quentin, at once contemplating the meaning of freedom, California’s shifting political climate, and Golden Gate sunsets.

A last minute addition to the lineup, Li Lovett (In the Lap of the Gods) read a gripping piece about anti-displacement protests in China. While the theme should be familiar to any San Franciscan, the scope of State repression she described was breathtaking. Lovett has worked as both an Instructor and a Counselor at City College.

As San Francisco continues to lose so many cultural institutions, it’s important to remember that City College continues to train and nurture future writers, artists, dancers and actors. Proposition W will make sure that this legacy continues.

James Tracy is an Adjunct Instructor at City College of San Francisco and the co-author of Hillbilly Nationalists, Urban Race Rebels and Black Power: Community Organizing in Radical Times.