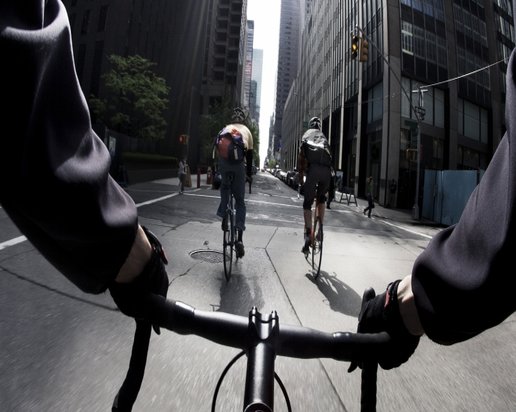 Several cities are experimenting with traffic light technology that would sense cyclists and make the road safer for them. Photo: GibsonPictures/iStock

Austin, Denver, and London are investigating devices that can detect cyclists to address the growing number of riders on the road.

Many traffic lights don’t recognize cyclists. They rely on inductive loops—basically giant metal detectors—buried underground that are set to detect multiton hunks of metal and trigger the signals from red to green.

While some cities are adjusting the settings of inductive loops so the units detect cyclists, a growing number of cities around the world are testing entirely new tech to ensure cyclists always trigger stoplights.

Take London, where a new pilot program slated to launch in the near future will utilize radar and thermal cameras to sense cyclists at an intersection. Once green, lights will accommodate cyclists, extending the duration of the green if cyclists are still riding through the intersection.

Then there’s Austin, which outfitted about 24 traffic lights with special sensors that communicate with a smartphone app. The signals detect riders who have downloaded and are running the app, which launched in beta last week.

Currently, the Texas pilot program is available only to a select group of city workers. The $250,000 trial will run until next year, at which time city planners will evaluate its effect, says Jim Dale, assistant director of traffic management at the Austin Transportation Department.

“With this app, we’re not looking for it to replace loops in the roadway. We’re seeing it as another tool to address the needs of detecting cyclists at intersections and to make it safer for them,” says Dale.

In Denver, seven intersections have either infrared or thermal cameras mounted on traffic lights to detect riders. A green bike symbol painted on the roadway indicates which intersections have the tech. The pilot will run through October, at which time the city will determine which camera is more effective and decide how to proceed.

These programs will address a steady increase of cycling in the city as well as increase the efficiency of multimodal transport (using more than one form of transit during your trip), according to Crissy Fanganello, director of transportation for Denver Public Works.

This article first appeared in Outside