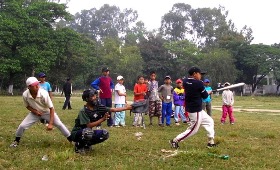 The documentary “Wampler’s Ascent” succeeds as a triumph of fact. Elizabeth Wampler’s film follows Steve Wampler’s attempt to climb the Yosemite National Park mountain El Capitan in a week. What makes Wampler’s task challenging is that he suffers from cerebral palsy. His plan is to rely solely on his upper body strength to patiently haul himself up two to six inches at a time. For perspective, El Capitan is about the height of two Empire State Buildings.

While it’s impressive that Wampler has chosen to undertake this challenge, the documentary fails to deliver the type of emotional catharsis that such an account deserves. One certainly can’t argue with Wampler’s motivation for his climb: raising money for a summer camp for handicapped kids that can inspire them to push past their physical and emotional limits. Yet what’s absent in depicting Wampler’s El Capitan climb and his life are the personal stakes endangered by failing to complete the climb. Will the funds pledged for the camp be forfeited? How badly demoralized would Wampler be if he doesn’t reach the top? The film is silent on these points.

That silence ultimately undercuts the value of “Wampler’s Ascent.” Without a reason to see Wampler’s expedition as personally significant, the viewer has no reason to strongly care about this climber’s success or failure. Harry Manfredini’s music certainly does nothing to persuade the audience either way.

“Wampler’s Ascent” may have been made with the noblest of intentions. But noble intentions don’t necessarily translate into artistic merit.

Hanauer and Lefcourt slay any audience buy-in for Samson and Delilah’s story. Sighs are evoked by “Sweet Talk”’s unimaginative reliance on tiresome clichés such as the manual typewriter with a partially-filled page (just to show Samson’s a struggling writer) and a Sweet Talk co-worker’s idle musing about the type of men who seek Sweet Talk’s services (just to set up that Samson is different from the usual Sweet Talk client). Even the lead characters’ names come off as a kindergarten attempt at wit.

Bad character construction in Lefcourt’s script ultimately bars a viewer from caring whether these two lonely characters actually physically connect. Samson never stops looking like a tool following his monologue about the advantages of deliberately making Delilah wait for his call back. Delilah is a graduate of a correspondence course from the school of “emotionally damaged sex worker unable to personally enjoy sexual pleasure.”

The minutes wasted watching “Sweet Talk” would have been better spent tracking down one of Susie Bright’s “Best American Erotica” collections.

Tjasa (a judge) and Uros (an astronomer), and Leon and Lena (married wedding planners) are students at the same Ljubljana tango class. The two couples soon become good friends. Yet since tango is a dance “which expresses a horizontal thought in a vertical position,” the stability of both couples’ relationships soon undergoes some serious rattling.

What the above-mentioned subtitle problem can’t take away from Pevec’s film is its wonderful visual brio. Scenes of the Ljubljana cityscapes become small visual jewels. A moment ending in a lighthearted touching of umbrellas sparks a classic MGM musical flashback. Tjasa delivers a glare in tango class that she probably reserves at work for particularly odious defendants,

One hopes “Tango Abrazos” leaps from the festival circuit to American commercial release. This entertaining charmer deserves to be seen widely.

“The Only Real Game” referenced in Mirra Bank’s documentary happens to be baseball. To the subjects of Bank’s film, baseball is as the saying goes more than just a game.

The distant Indian province of Manipuri has been under martial law for 60 years thanks to a forcible annexation which spawned dozens of separatist movements. Plagued by military brutality, 25% unemployment, and drug abuse, the province seems doomed to slow social death.

Baseball, introduced to Manipuri by World War II American pilots, became adopted by the province natives. However, lack of training, facilities or even proper equipment keeps the Manipuris from developing a truly strong baseball culture. American baseball charity group First Base arranges delivery of trainers and equipment. But how much can baseball truly change decades of repressive neglect?

“The Only Real Game” nimbly avoids turning into a tale of American benevolence redeeming a troubled Third World society. The two Major League Baseball trainers are grounded enough to know introducing baseball will not end Manipuri’s political troubles. Then again, there is something to be said for the moment when a group of Indian Army soldiers manage to get inveigled into playing a baseball game.

Hearing the stories of some of the Manipuri players also makes a viewer want to believe in baseball’s transformative powers. AIDS educator Davika wants to use baseball to offer hope to her daughter. Teenager Lalit hopes to turn his natural talent for the game into a career in Major League Baseball.

By the film’s end, one hopes Manipuri’s players will be given the chance to make their mark in America.