Chronicle: Prop. B Nothing But a ‘Guilt Trip’ 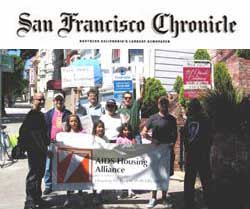 After more than 25 years of siding against tenants on every measure put on the city’s ballot, it wasn’t surprising to see the San Francisco Chronicle come down against Proposition B over the weekend. The measure would require property sellers to notify potential buyers early on if the eviction of a senior or disabled tenant occurred there, and the minor inconvenience it could cause landlords virtually guaranteed a ‘No on B.’ What was surprising, however, was the flippant way the Chronicle dismissed the entire proposal as doing ‘nothing but add[ing] a guilt trip on would-be buyers looking to buy a home.’ Apparently, the Chronicle’s editorial board believes that discovering an elderly or disabled person was thrown out of their home to create a vacancy would register as little more than a fleeting ‘guilt trip’ for San Francisco’s homebuyers, revealing the paper’s profound disconnect from a city that prides itself on making morality a deciding factor in how it spends its money.

Five Supervisors put Prop. B on the ballot after Mayor Gavin Newsom vetoed a similar measure earlier this year. While it initially appeared like it could cause a major battle between mayoral allies and progressives, Newsom’s decision to remain quiet on the measure left little controversy surrounding it.

The Chronicle coming out against a tenant measure that even the Mayor hasn’t actively opposed remains in line with the paper’s editorial policy. From Feinstein to Brown to Newsom, the Chronicle has religiously weighed in against any tenant measure placed on the ballot, even when the city’s more moderate or conservative politicos supported them.

This practice reveals a real disconnect from the city’s residents on tenant issues. What’s even more revealing of this disconnect, however, involves a campaign headed up by the Tenant’s Union last year. Tenant activists throughout the city picketed buildings for sale where Ellis Act evictions occurred. The reasoning behind the campaign was simple – if more people knew about the history of these buildings, less people would buy them. And if less people bought them, less evictions would occur.

The campaign proved an overwhelming success, with an estimated 70 percent of potential homebuyers turning away from picketed buildings. The lesson learned from the effort: when San Franciscans know a building has a history of eviction, they’re far less willing to even consider buying it.

This fact would seem like a no-brainer for the Chronicle, which has extensively documented the Bay Area’s insistence on injecting a high level of morality into their consumption. From shade-grown, fair trade coffee to faux leather sneakers, San Francisco represents ground zero for turning spending money into a political statement.

That’s why the Chronicle’s argument that Prop. B ‘won’t…preserve any housing for the tenants it pretends to protect’ doesn’t make sense. There’s simply no question that informing more potential buyers about the eviction history of homes on the market will slow the purchase of those homes. And every building where a landlord decides not to evict senior or disabled people because those homes are harder to sell represents preserved housing for tenants.

However, an even more offensive aspect in the Chronicle’s anti-Prop. B screed is their equating more consumer disclosure with a ‘guilt-trip.’ By this line of reasoning, lead would never have been listed as a dangerous additive to paint because it makes people feel guilty. The Surgeon General’s warning on packs of cigarettes would be taken off, because the government should not worry smokers. And right now, the holes in the ozone would be getting bigger instead of smaller, as CFCs would have never been listed as an ingredient on aerosol cans.

In the words, of tenant leader Ted Gullicksen, “Maybe people should feel guilty about evictions.”

Whether it’s a new home or bag of potato chips, this city’s residents want more information about the goods they buy, not less. And if that information is unpleasant – say, the fact that a disabled senior was permanently forced out of San Francisco to create a vacant home – the chances are that the resulting ‘guilt trip’ will help make this city a better place.