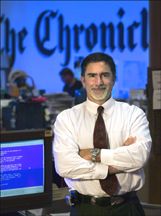 Yesterday several high-ranking members off the Chronicle staff, including Executive Editor Phil Bronstein, Managing Editor Robert Rosenthal, Deputy Managing Editor Stephen Proctor and City Hall reporter Rachel Gordon, turned out to answer questions from the half-full Koret Auditorium at the main branch of the Public Library. The panel at the “town hall meeting” took questions and heard comments from the mostly invited audience for two hours, until the closing library forced everyone to leave, and responded briefly to each person that spoke.

Bronstein opened with a short talk, holding up the late columnist Herb Caen as his model, not just because of his immense knowledge of the city but because “he knew how to make people feel special for living here” and saying “we try to tell the story of San Francisco.” He also gave a nod to the Examiner’s local coverage, which has vastly improved since its change in ownership, saying “we consider them genuine competition and competition is good.”


Bronstein recognized criticism that the Chronicle has diluted its metro San Francisco coverage in favor of bay-area wide reporting, saying that although the Chronicle is a regional paper, “San Francisco is at the Hub.” Bronstein pointed to the Friday all San Francisco section, its lengthly coverage of Kevin Shelly/Julie Lee fundraising scandal, and the assignment of reporter Kevin Fagan, a photographer and “thousands of column inches” to homelessness in the city as evidence of the paper’s local commitment.

He then opened up for minute long questions/comments from the audience. First up was Ernestine White, who bluntly encouraged the Chronicle to get its reporters into the neighborhoods and said “forget the swells section [a society page] we’re not as interested in that as you think.” Many people in the audience echoed her sentiments over the course of the evening, calling for the Chronicle to cut back on its more “frivolous” features and its coverage of stories like the Scott Petersen murder trial in favor of coverage of Ellis act evictions, stronger criticism of the city’s homeless count, neighborhood events and activists and local campaign contributions.

John Avalos asked the Panel why the paper made a recent story about federal cuts to Hope VI housing funds into a piece about Mayor Newsom’s reaction rather than about the cuts themselves. The editors said that the cuts had been going on for years and that they believed the Mayor’s view was a fresh way to look at the issue.

Another man asked why the Chronicle was not covering the displacement of some homeless from shelters as a result of the Care not Cash program. He also said that the Chronicle had not been critical enough of the recent city homeless count, which has been criticized on this site, and asked “why do you not demand a recount?” Rosenthal replied that “our homeless coverage is continuing” and said that “every question you just asked are our questions too.”

Terry Frye, of the Tenderloin Housing Clinic, asked why the paper was not covering evictions out under the Ellis Act, which she said allowed speculators to buy rental properties cheaply, sell them in order to “get out of the rental business” and then convert them to more profitable condos. Rachel Gordon said that housing is “the hot button issue that gets everybody going” and pointed to yesterday’s story on tenancy in common as an indication that the Chronicle was covering housing issues.

Some people even had specific stories to pitch. A woman from Bayview-Hunter’s Point complimented the Chronicle’s coverage of the Hunter’s Point Shipyard. A man from the outer sunset suggested that they do a story on parks built in his neighborhood without the help of the city. Several of the editors gave out the phone numbers of reporters that might be interested in such stories and stayed afterwards to hear more pitches.

Proctor admitted that San Francisco metro coverage was “threadbare” on some days, particularly sunday and monday, though he added “I think the weekday sections are pretty substantial” and said that the paper had added 12 columns of city news. Though many people in the crowd asked the panel to scale back national and international stories in favor of more comprehensive local coverage, Proctor said that many of the paper’s readers, and some in the audience, had asked them to increase their nation and world coverage.

Phil Bronstein repeatedly said that he wanted the Chronicle to have a community connection, to be a paper “around which people can gather” and pointed to this town hall meeting as an example of outreach. It will be interesting to see if the Chronicle follows up on any of the stories pitched by the audience, like the India-Basin land sale, deepens its coverage of homelessness to address issues like shelter displacement or looks into abuses of the Ellis act and Assemblyman Mark Leno’s attempts to fight them. The last two issues have been extensively covered by Beyondchron and organizations like it will continue to add to, and often oppose, the coverage of the “Voice of the West.”