Chronicle Gets No Stars for Falsehoods About All Star Hotel 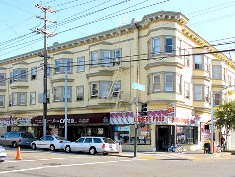 On January 9, the San Francisco Chronicle ran a story that falsely charged the Tenderloin Housing Clinic (THC) with failing to make repairs at the All Star Hotel, 2791 16th Street. The heart of the story—-and title of the sfgate.com version, “Slanted Floors Hotel”—blamed THC for hotel’s floors “slanted so badly that people were falling down. “ But the article does not reveal that the All Star has never been cited by the city for “slanted floors.” It also omits that the city rejected the tenant’s complaint that is the core of the story. Eager to blame the nonprofit THC, the story lied in claiming that the code violations were THC’s responsibility rather than the building’s owner.

Reporter Kale Williams could easily have learned the truth about THC’s lack of blame, but failed to contact the city’s Human Services Agency (which funds the hotel), the Chief Housing Inspector or THC’s Executive Director (me). And that failure was no accident. San Francisco has many buildings with outstanding code violations impacting tenants lives, but the only news hook for writing about the All Star— which does not have such violations—was to attack a nonprofit operator.

I’ve seen a lot of bad reporting in my time, but the Chronicle’s attack on the THC (publisher of Beyond Chron) is among the worst. A reporter with no concern with facts, and a city editor unwilling to promptly correct admitted falsehoods, resulted in a prominent article defaming the hard working janitors, desk clerks, maintenance workers, case managers and management staff at the All Star Hotel.

A Non-Story Plus Lies

The Chronicle’s core problem was that there are no outstanding code violations impacting tenants at the All Star Hotel. So it made stuff up.

The story opens by noting the complaints of two tenants:

“Starting in February 2012, they called attention to leaking pipes, exposed structural beams and floors that were, in some places, “slanted so badly that people were falling down,” according to Department of Building Inspection records.

But the response by the property manager, the Tenderloin Housing Clinic – a nonprofit that receives city funding – was anything but swift.”

The citations were directed at the owner, who is solely responsible for the commercial space.

“Officials at the Tenderloin Housing Clinic did not respond to requests for comment. But at the All Star Hotel this week, property manager Jordan San Pedro said all of the violations had been addressed.

‘Everything’s been taken care of by building maintenance,’ he said.

But Eldon Brown, a resident of the hotel for the past eight years and one of those who originally complained, said more needs to be done. ‘They really need to get a civil engineer in here. You can see how bad it is,’ he said, gesturing down a hallway with bowed floors and visibly slanted walls.

I didn’t respond to a request for comment because I got no request. Chronicle reporters all have my email address and most my cell phone number yet this reporter failed to contact the person at THC who deals with media inquiries.

Nothing in the story refutes the statement by THC’s manager that all violations were addressed. This alone raises the question of why this became a headline story in the Chronicle.

But then the Chronicle allows Eldon Brown, who has no technical expertise and has likely filed more DBI complaints than all of THC’s over 1700 tenants combined (32 alone in 2012-13), to raise fears of tenant safety by making baseless claims about an unstable building.

Did the reporter tell readers that the hotel has never been cited for slanted floors? No. Did he reveal that the city conducted a complete inspection prior to contracting with THC for the property, and that the floors were in the same condition at that time? No.

Think a moment. How could alleged “slanted floors” be THC’s fault in the first place? It doesn’t own the building. Yet the Chronicle turned this non-code violation into an action item, claiming THC was responsible and including our phone number so angry readers could spur us to action.

Action for a nonexistent problem invented by the SF Chronicle.

As soon as I saw the false story, I contacted Chronicle editors demanding a retraction. City editor Gerry Spratt admitted at 11:00 am that THC had been falsely charged with responsibility for the violations, but he kept the erroneous charges in the online story until making a minor revision at 5pm. That revision occurred after I told him that we were filing a defamation action against the Chronicle unless they retracted known falsehoods about THC.

The Chronicle’s problem is that there is no story here without a nonprofit villain. The whole piece is designed to anger readers toward a nonprofit group getting city fund to house the poor only to violate their tenants’ needs. You would never see a huge Chronicle story that defamed a for-profit owner based entirely on the claims of two tenants in an 85-unit apartment building, particularly without talking to the owner, DBI’s chief housing inspector or other sources.

One of our longtime desk clerks at the All Star came by my office after the story appeared saying a friend messaged him the story via Facebook asking why his hotel had such problems. He felt that the public had been lied to and that it wasn’t fair. I agree. THC’s staff does an outstanding job housing an often-troubled tenant population, but the Chronicle never writes about their day-to-day successes.

That’s because nonprofit workers are expected to effectively serve the needs of the poor, so their success is not “news.” And as the Chronicle again showed with its All Star falsehoods, when nonprofits don’t do bad things to create news, a poor reporter can invent wrongdoing.

THC is reviewing its legal options.