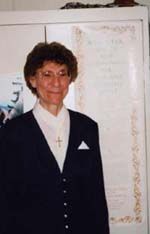 Sister Bernie Galvin of Religious Witness for Homeless People didn’t expect her meeting with the San Francisco Chronicle’s Editorial Board to become another C.W. Nevius hit-piece. But that’s what happened on the front page of yesterday’s Bay Area edition – as the ex-sports writer used the meeting with Galvin and other religious leaders as an excuse to continue peddling his mean-spirited attacks on the homeless. “We thought we had an opportunity to discuss these issues informally,” said Galvin, “and to suggest that [the Chronicle] take a broader view of the problem. Homelessness must be set within the social context of extreme poverty – not just to see the symptoms and grapple with them endlessly.” Instead, Nevius pulled a cheap shot to stereotype homeless advocates the way he has stereotyped the homeless over the past five months.

When talking to the press, you always run the risk that things you say are not “off the record” – and the Chronicle never promised not to publish anything that came out of that meeting. “But I wouldn’t think that if you sit down to have a conversation,” said Galvin, “that it would be on the front page the very next day. The intention was never to make this meeting a ‘news story.’ [Nevius] could have had the courtesy to at least say that he would turn it into another one of his columns.”

As Nevius himself admitted, Galvin is not some naïve rookie who should have known better when meeting with professional journalists. The religious homeless advocate has met with the Chronicle Editorial Board in the past – and those meetings would never be so blatantly exploited in that way. “It’s never been my experience when meeting with such groups,” she said. “We were just morally troubled by the Chronicle’s coverage of homelessness in the past five months, and wanted to have a conversation.”

Galvin wasn’t happy, as well, with how Nevius characterized the homeless advocates. “They lit into my columns with a vengeance,” he wrote, as he described the advocates as repeating “old, familiar contentions” about homelessness – with “always the same” answers to a problem that everyone acknowledges is pervasive. “Our presence,” said Galvin, “has always been very professional, intelligent, and well-informed. We are not in the spirit of blaming anyone. There is a difference between passion and vengeance.”

Nevius did give Galvin a back-handed compliment about how Mayor Gavin Newsom should agree to meet with the religious leader – which he has consistently refused to do, unlike his predecessors Frank Jordan and Willie Brown. But Galvin explains that the approach he chose to take was a little condescending – in a similar tone, she said, of many men who were raised in parochial schools. “As a good Catholic kid,” said Nevius, “[Gavin Newsom] probably doesn’t look forward to a lecture from a nun … But it’s not so bad. She’s scary, but she’s not that scary.”

But the most outrageous part of Nevius’ column was how he made points that were at best grossly misleading, or in some cases factually incorrect. He claimed that the homeless advocates said that every single homeless person should be “immediately” provided with permanent housing – and went on to ridicule such a lofty goal. “We would never be so stupid to say that,” said Galvin. While they stressed the affordable housing crisis, she said, even they understand you can’t immediately house everybody. Nevius’ characaterization made them look hopelessly impractical.

After deriding the mammoth cost of housing everybody, Nevius then goes on to support Laura’s Law – a proposal requiring severely mentally ill people to stay on their medication – without regard for how much that program would cost. He also claimed that Religious Witness opposes it – which is untrue. “We never took a position on it,” said Galvin. The problem, she explained, is that there’s no money to implement Laura’s Law statewide – due in part to Governor Schwarzenegger’s drastic mental health cuts in the budget.

At one point, Nevius took the advocates to task for criticizing the Chronicle for negative terms about the homeless that never appeared under his byline, but were instead written in response through the comments section on SFGate. What he failed to mention, however, is that Rev. Jana Drakka – who read out those statements at the meeting – acknowledged this discrepancy, and apologized to the Editorial Board when that was pointed out. Again, he portrayed the advocates as over-excited ideologues who can’t control their anger, letting the facts get into the way of their opinion.

Galvin says that what Nevius’ columns have done is to stereotype homeless people with mean-spirited pejoratives, by focusing only on the unpleasant symptoms of people living in the streets – rather than the overall economic issues that create homelessness. “In his latest column,” she said, “he went on to stereotype us in the same way that he has repeatedly stereotyped homeless people. He exploited our meeting with the Editorial Board as a means to attack us in another column.”

And that, said Galvin, showed how little the Chronicle has learned from their meeting — a meeting that they had requested to express their concern about the paper’s mean-spirited coverage of a critical issue. After all, they just wanted to talk.