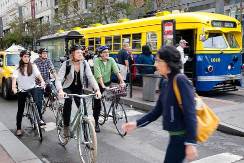 San Francisco Supervisor David Chiu is revitalizing a plan that could see private traffic on Market Street become a thing of the past. In late January, Chiu hopes to reboot and revisit a resolution passed in 2011 that would limit private vehicles in an effort to boost foot and bicycle safety. “A Market Street with no private automobiles will be safer for both bicyclists and pedestrians and will improve Muni speed and reliability,” SF Bicycle Coalition spokesperson Kristin Smith told Beyond Chron. “Private automobile traffic currently makes up only 14 percent of traffic on Market Street, and these are often lost tourists trying to get off of Market Street.”

Smith also discounts one of the often pushed myths about taking private vehicles off the street: congestion. For Smith and SF Bike, this is a moot point when one looks at the reality of the street currently, and the statistics that point against such arguments.

“Opponents of this project cite congestion on alternate streets and diminished evening safety as their primary concerns,” she continued. “So we’re not talking about a large volume of cars. The current auto restrictions have shown no negative effects to traffic along Mission St, which is the easiest alternate route, and we expect an expansion of auto restrictions would yield similar results.”

The initial resolution, which coincided with the Transit-First policy – approved by voters – would see a major boost in buses and public transportation into and out of the area, in addition to widening sidewalks and increasing bike lanes, which the city council believes could bear witness to an increase in overall business and foot traffic for shops, restaurants and other businesses.

Many observers have long called on the mayor’s office and the city’s Board of Supervisors to implement concrete plans to bolster Market Street and other thoroughfares in the city’s efforts to increase the ease of doing travel via bicycle.

In a September article last year, Beyond Chron Editor Randy Shaw pointed this out in an editorial comparing the city to New York, which has moved toward a more bicycle friendly city.

“But I think the Mayor, Board and most people have higher expectations for the onetime Great White Way. And that means doing for Market Street what New York City did for vast sectors of its busy midtown area and other key thoroughfares: increase commercial and sidewalk activity by creating and encouraging bike thoroughfares,” he wrote.

Others agree that more can be done, including everyday bicyclists in the area, who speak of stopping for coffee on their way to work and that by increasing lanes for non-motorized vehicles would go a long way in allowing others to feel safe about taking alternative means to their jobs and meetings.

“I don’t know how many times I have noticed something new or seen a place I’d like to check out and I don’t think I would if I was in my car always looking for parking,” said Brandon, a 29-year-old account in the Financial District who bikes to work daily from his apartment in The Haight.

“I like to think San Francisco is a great place for bikers, but right now, we have a lot of work to be done to show the country we are a leader,” he added before speeding off to his office, a coffee cup nicely tied to his handlebars.

Overall, the ones leading the charge towards a better bicycle friendly one is the San Francisco Bicycle Coalition, which has promoted and campaigned for the Market Street changes, and they know what they are talking about, delivering key statistics that would make even the ardent antagonist a leading supporter of the bicycle revolution taking place.

A broad coalition of residents, bicyclists and businesses is growins in support of what they believe will be a dramatically positive change for Market Street, and one that will help finally return the street to its onetime greatness

While the statistics and popular belief seems to be in line that this is a good idea, some businesses remain on the fence, wondering and even questioning the efficacy of the idea.

Mohsin, 64, is hopeful for business on Market Street, even as he continues to try and sell all his store’s items before his lease is up and he retires. A resolution that went into effect in September 2011 is getting renewed strength in the San Francisco City Council as it pushes for private cars to be redirected away from the city’s main economic thoroughfare.

The move could set Market Street up to be the leading artery for pedestrian and bicycle traffic in the state, if not the country, with only delivery vehicles and taxis being permitted on the street from 8th Street to Octavia Boulevard. This, Mohsin and others believe could be a double-edged sword against the businesses on the street.

“I am very well aware of all the cars we get on this street and sometimes a lot of those drivers see a shop they want to check out and then find it,” he told Beyond Chron, “but at the same time, and I think the government sees this, most of the cars are just looking for parking and already have their destination planned, so I don’t think it will be bad.”

But he won’t go as far as saying it will be all positives for businesses. “I think it will be a wait and see issue and if successful and public transport is increased, it could be just fine,” he added.

“I think in the end a calmer, safer street for people will be good for business,” said Mohsin.