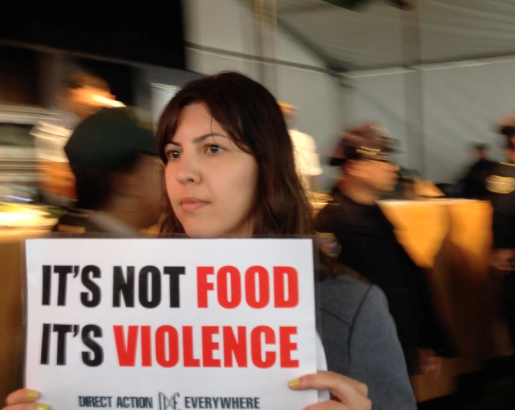 The tens of thousands of Bay Area residents who streamed into the Chipotle Cultivate Festival this past Saturday were greeted with a surprising sight: dozens of animal rights activists with Direct Action Everywhere (DxE) donning theatrical blood-stained masks to protest against the chain and its keynote speaker Graham Elliot. The demonstration, part of DxE’s “It’s not Food, It’s Violence” campaign which has now reached 41 cities in 12 countries, protested the chain and food industry’s attempts to whitewash animal agriculture as compassionate towards animals.

“The theme for Cultivate is Cultivating a Better World,” activist Jude Li said. “But Chipotle is one of the world’s leaders in cruelty.”

In the morning, the protesters formed a line spanning hundreds of feet while holding signs with the message, “What is Chipotle Hiding?” At the entrance, a larger collection of protesters answered the question by holding large banners with images of animals killed by Chipotle and other food corporations.

Later in the evening, DxE protesters disrupted a talk by one of the festival’s keynote speakers, celebrated chef and television personality Graham Elliot. The activists say that Elliot celebrates violence against animals. (“There’s no two sexier words in the English language than bacon fat,” Elliot recently said to New York Magazine.)

What started out as a single protester speaking before Elliot and the crowd, however, suddenly transformed into dozens of activists standing up from their seats donning bloody masks. Finally, one activist, theatrically painted with fake wounds, stood before the crowd and laid himself out on Elliot’s cooking table with a sign, “Killing is Killing.”

“Steve, do you have that foie gras in the back?” Elliot said in response, referring to the now-banned product of force feeding.

“The response by the company and its featured speaker are really telling,” protester Noelle Lai Schiller said. “They say they love animals, and yet they encourage people to seek out criminal animal abuse?”

The DxE activists say Chipotle, though one of the fastest growing chains in the nation and now the third largest publicly-traded restaurant company, is merely illustrative of a larger problem.

“No one would do such terrible things to a dog or cat, or a human child for that matter. It’s time for us to give other animals the same rights,” protester Li said.