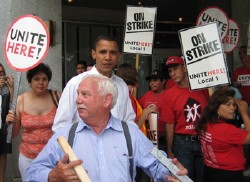 After ten years, UNITEHERE Local 1workers at the Congress Plaza Hotel have ended their strike and unconditionally agreed to return to work. The strike drew national attention both for its length and the pledge by presidential candidate Barack Obama that he would follow up his 2007 walking on the Congress picket line by joining strikers after being elected President (a pledge he did not keep). The strike shows how U.S. labor law permits employers to avoid good faith bargaining potentially forever so long as they are willing to accept the type of massive financial losses incurred at the Congress Plaza Hotel. Here are many of the details surrounding the strike’s end.