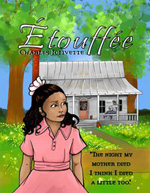 For some strange reason, the American South has produced some of the most memorable young women in the world of fiction. Who can ever forget the amazing Celie from Alice Walker’s “The Color Purple”, Scout Finch from Harper Lee’s “To Kill a Mockingbird”, Mick Kelly from Carson McCuller’s “The Heart is a Lonely Hunter”and most recently, Lily Owens from Sue Monk Kidd’s ” The Secret Life of Bees”? Enter the young Rozina Broussard, from local author Charles Jolivette’s new novel “Étouffée”. Like the heroines of aforementioned novels, Rozina may well be another one of those characters who will stay with you long after the novel has been read.

Food and family have apparently always been important to Jolivette. Growing up in San Francisco in a large Louisiana-Creole family, Jolivette was well-accustomed to good food and strong family. At the age of 9, he wrote a letter to the critically acclaimed author Maya Angelou, asking her to review his poetry manuscript. It was his early passion for writing that led him to a 10-year recording career which included sponsorships from Rockstar Energy Drink, creolefashions.com and live performances with international sensation Michael Franti and platinum recording artists Conscious Daughters.

Jolivette’s debut novel has been a labor of love, spanning almost five years of writing, editing, character cultivation and rewrites. Originally written for the big screen, Jolivette spent the last 18 months rewriting the movie into a novel. He is currently producing more several projects, including the next two installments of “Étouffée”, as well as his “Bayou Babies” children’s books and a book of poetry entitled, “While The Gumbo Cools”.

Étouffée takes place in the Louisiana of the 1940s and the portrait Jolivette paints of family, gumbo, and music of the “Big Easy” is one of its most endearing qualities. According to Jolivette, many of the characters and the events in Étouffée were also drawn from an amalgamation of people from his family’s personal history. “For poor Creole people living in the complex segregation of Opelousas, Louisiana in 1949, the most important necessity is a strong family relationship. For the sassy 9-year-old Rozina Broussard, family means her widower father Tilan, a talented and highly respected Zydeco musician. Tilan’s band is the Creole Kings, a four-man entourage managed by former Zydeco singer Raoul Bordeneux, whose rowdy nights full of over indulgence, liquor and mischievous women cause immediate displeasure for the straight-arrow Tilan…”

“As Tilan’s popularity rises, Raoul’s battle with alcoholism hits its peak. Raoul’s unstable antics cause irrepressible tension between himself and the Kings. Local club owner and former street goon Reid Turner’s devious criminal mind rears itself as the desperate club owner receives a foreclosure letter from the State of Louisiana. In need of an extra $20,000 by year’s end, Reid sets into play a dangerous ploy of vengeance and greed that threatens to leave Rozina parentless…”

Unlike other novels of the genre, Jolivette didn’t choose to narrate his tale through the eyes of Rozina, (Harper Lee chose to tell Scout’s story retrospectively), however so many of his colorful characters like the affable “BB” and the vivacious “Inez Martin”, said and did a variety of things that may well have been better left unseen by the impressionable Rozina. Nevertheless, Jolivette’s vivid depictions of those bygone, late-night poker games, unscrupulous club owners, gumbo cook-offs, bawdy women and fabulous musicians, made me want jump in and join the fun.

Jolivette builds his story slowly, giving the reader an opportunity to get a feel for the characters until the dramatic, cliff-hanging final chapters. I wasn’t able to put it down at that point. I’ll paraphrase Jolivette’s own description of the novel by proclaiming that Étouffée is indeed, “a unique view into the lives of a family traumatized by death and bound together by their love for food, music and each other.”

For a little taste of Creole in California, have a little “Étouffée”, Jolivette style.