Cesar Chavez, the UFW and the Roots of Obama’s Field Campaign 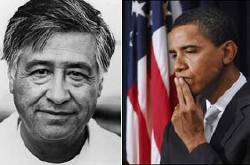 Last week, Zack Exley wrote a compelling article on the Obama campaign’s extremely effective “ground game” in Ohio. Comments on the piece—as well as peoples’ experience elsewhere—confirmed that Obama’s highly disciplined Ohio field operation is used in other states, which helps explain the candidate’s success in the polls. But Obama’s voter outreach model is not a new invention. Cesar Chavez, the UFW, and UFW alumni developed many of these core grassroots electoral strategies, and it took the Barack Obama campaign to update them for the Internet age and implement the UFW model on a national scale. The story of the Obama campaign’s utilizing an electoral model that Fred Ross initiated in Los Angeles in 1949, passed on to Cesar Chavez and the UFW in the 1960’s and 70’s, and which was then enhanced by UFW alumni in the past two decades, is little known. But it helps explains why Barack Obama is headed for victory.

When Barack Obama adopted the campaign theme, “Yes We Can”, he was embracing the rallying cry popularized by Cesar Chavez and the United Farm Workers in the 1970’s—“Si, Se Puede.” But less known is how former community organizer Obama has also implemented the UFW’s electoral outreach model.

In 1949, Fred Ross ran the field campaign for Edward Roybal, who was trying to become the first Mexican-American to win a Los Angeles City Council election in more than 70 years. Ross developed an intensive voter registration campaign, a door-to-door outreach effort, and the most intensive get out the vote effort that the Latino community had ever seen. Roybal prevailed, a victory that has been described as “the birth of Latino politics in California.”

During the 1950’s, Ross recruited and then trained a young Chicano named Cesar Chavez. When the UFW faced its first union election vote in 1967, Chavez turned to Ross to run the campaign. Ross trained fifty to sixty organizers for this election, a process that former UFW Organizing Director Marshall Ganz described as akin to a “school.” Following the model he had successfully used to elect Roybal, Ross required organizers to keep a file card on each worker, to record every contact, to write down any questions the worker had, and to keep going back to the worker until they agreed to vote for the union.

Ross’s meticulous approach to winning the election in the fields became the model for the UFW’s electoral outreach approach, which the union pioneered with its grassroots campaign for Robert Kennedy in the 1968 California Democratic Presidential primary. The UFW treated the political campaign like a community organizing drive, going door-to-door in the barrios of East Los Angeles and other communities in a throwback to tactics that predated the television advertising age. Post-election analysis found that the UFW’s turnout of Mexican-American voters provided most of Kennedy’s narrow victory margin over rival Gene McCarthy.

In 1972, the UFW faced a well-funded, grower-backed California ballot initiative (Proposition 22) that Cesar Chavez announced would “destroy” efforts to build a farmworkers union. Knowing a large Latino turnout was necessary to defeat the measure, the UFW set up precinct operations in East Los Angeles and Latino communities across the state. In East L.A.’s Lincoln Park, the union set up a tent city to house hundreds of farmworkers who came from the fields to help the campaign. Though heavily outspent, the UFW defeated Prop 22 by over one million votes, again demonstrating its ability to get Latinos to the polls.

In both 1968 and 1972, the UFW virtually stood alone as a union whose members and staff engaged in grassroots electoral outreach. Most unions relied on making campaign donations to politicians, combined with a phone call or letter to its members. Organized labor’s participation in grassroots voter outreach is so extensive today that it is easy to forget that the UFW was doing nearly three decades earlier.

In 1976, the UFW put its own measure on the California ballot. Although Proposition 14 failed due to poor drafting and timing, it brought the union’s entire national boycott staff together in what might have been the largest statewide grassroots campaign ever waged. The Prop 14 campaign trained an entire generation of activists in voter registration drives, mass petition campaigns, intensive door to door and street outreach, public visibility events and election day get out the vote efforts. If these tactics sound familiar, it may be because former UFW Organizing Director Marshall Ganz, who led the Prop 14 effort, went on in 2007 to develop the “Camp Obama” organizing strategies for Barack Obama’s presidential campaign.

By 1981, most UFW organizers had left the union. Some brought their grassroots electoral skills to new realms. Among them was Miguel Contreras, who became head of the Los Angeles County Federation of Labor in 1996. Contreras soon implemented an UFW-inspired electoral model emphasizing voter registration, precinct walking, and Election Day voter outreach among union members and Latino immigrants. Boosted by UFW veterans Eliseo Medina and Chava Bustamonte, this model soon went statewide, dramatically increasing the number of newly registered Latinos who were Democrats, doubling the Latino share of the electorate, and adding over one million Latino voters to the rolls. Increased Latino voting brought Democrats commanding majorities in the State Legislature, California’s first Latino Assembly Speaker, and Los Angeles’ first Latino mayor of the modern era.

What distinguished California from other states was the widespread use of the UFW electoral outreach model to boost Latino voting. This model facilitates voter registration, ensures an informed electorate, and boost voter turnout. Eliseo Medina, the former UFW leader now Executive Vice-President of the Service Employees International Union (SEIU) joined with other groups prior to the 2006 midterm elections in creating Mi Familia Vota (MFV). The result? Two anti-immigrant Congress members were defeated in Arizona, and Democrats gained an open congressional seat in Colorado in a race where immigration was the top issue.

Today, Mi Familia Vota is working in eleven states, and its efforts to increase Latino voting in Colorado, New Mexico, Nevada and Florida—all four of which went for President Bush in 2004—could swing the election to Obama.

Forty years ago, Cesar Chavez and the UFW began working to increase Latino voting. The UFW’s successful model remained isolated for decades while national campaigns relied on massive television and radio advertising unlikely to meaningfully boost Latino turnout. Finally, Barack Obama implemented the UFW outreach model to guide his entire national field campaign, a decision that will likely make him our next President.

Randy Shaw is the author of the newly released, Beyond the Fields: Cesar Chavez, the UFW and the Struggle for Justice in the 21st Century (University of California Press)