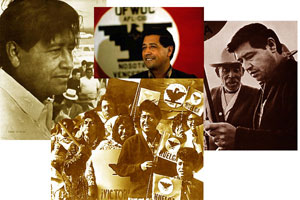 “César Chávez exists in the forefront of our collective memory for his achievements in alleviating the suffering of migrant farm workers and bringing hope to all people who resist oppression. During his more than 30 years of public life, César Chávez brought national attention for the first time not only to Mexican Americans but to the working poor from all ethnic groups. He fasted to inspire members of the United Farm Workers to commit themselves to nonviolence in their struggle for justice and he fasted to focus the world’s attention on the suffering that migrant farm workers had endured for many generations. He saw significant gains and heartbreaking losses. As recently as 1990, he was arrested in East Los Angeles for picketing a food chain. He lived his belief that “there is no way on this earth in which you can say yes to man’s dignity and know that you’re going to be spared some sacrifice.”- Juan Francisco Lara, Ph.D.