CEOs to Workers: More for Me, Less for You 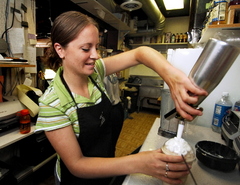 Big company CEOs got a 23 percent raise last year and corporate profits are at record highs. But the minimum wage has less buying power now than in 1956 – the year Elvis Presley first topped the charts, videotape was breakthrough technology and the Dow closed above 500 for the very first time.

It’s no accident wages are down while corporate profits are up. As JPMorgan’s July 11 “Eye on the Market” newsletter put it, “Reductions in wages and benefits explain the majority of the net improvement in [profit] margins – US labor compensation is now at a 50-year low relative to both company sales and US GDP.”

The minimum wage sets the floor under wages, and that floor is sinking. The 1956 minimum wage was $8.30, adjusted for inflation.

CEOs make more in a few hours than minimum wage workers who care for children, the ill and the elderly make in a year. Median CEO pay was $10.8 million last year among 200 big companies measured by Equilar.

The $15,080 minimum wage workers have for rent, groceries, transportation, medicine and everything else for the year doesn’t even buy 2 pounds of the imported caviar featured in the Forbes Cost of Living Extremely Well Index.

That doesn’t help our corner stores, our communities or our national economy. It hurts.

We didn’t have to go backwards. U.S. income grew $11,684 on average between 1969 and 2008, the year Wall Street drove our economy off a cliff. But there was nothing average about the actual income distribution. Every dime of income growth went to the top 10 percent. Income for the bottom 90 percent declined.

You can’t have a strong middle class or a strong economy if the bottom 90 percent gets none of the nation’s income growth.

If the minimum wage had stayed above the $10.38 value it had in 1968, it would have put upward pressure – rather than downward pressure – on the average worker wage. Wal-Mart and McDonald’s, our nation’s largest employers, couldn’t routinely pay $7.25 or a little above.

McDonald’s wages would be more like In-N-Out Burger, which has an entry wage of $10 plus good benefits and beats McDonald’s and other fast food chains in the new Consumer Reports ratings for food, service, value and speed. Wal-Mart’s wages would be closer to Costco, which pays starting wages of $11, has the lowest employee turnover in retail, doesn’t need to spend money on advertising and outperforms Wal-Mart.

The 2010 American Values Survey found that 67 percent of Americans supported increasing the minimum wage from $7.25 to $10.

Critics routinely oppose minimum wage increases in good times and bad, claiming wrongly they will increase unemployment. The most rigorous studies of the impact of actual minimum wage increases, including two studies published recently in the journal Industrial Relations and the Review of Economics and Statistics, show they do not cause job losses – whether during periods of economic growth or recession.

In the words of John Shepley, co-owner of Emory Knoll Farms in Maryland and a member of Business for a Fair Minimum Wage, “The notion that raising the minimum wage will kill jobs is just bunk. People at the lower end of earnings tend to spend 100 percent of their after-tax income. They put it right back into local businesses buying food, clothing, car repairs and other necessities. – When the minimum wage is too low it not only impoverishes productive workers, it weakens the key consumer demand at the heart of our local economy.”

It’s time to stop stuffing the penthouse of the economy with gold and rebuild the crumbling foundation.

Holly Sklar’s books include “Raise the Floor: Wages and Policies That Work for All of Us,” “A Just Minimum Wage: Good for Workers, Business and Our Future” and “Streets of Hope: The Fall and Rise of an Urban Neighborhood.” This piece was earlier published at Common Dreams.