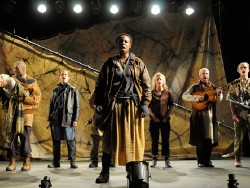 Yes, there is the preachiness – but hang on, because in the cliffs and valleys you will find interesting gems that break up the Brectonian sermon. One thing is very clear. Some of the language is very clever and you have to really listen carefully to catch the ‘double meaning’ of the words. It’s like a puzzle – as the play goes on, you begin to put the pieces together. This is a very gritty newly re-imagined look at this oft-told story about power, struggle and the Rich versus the Poor. And just like today. The rulers are crooked and cunning and the poor people hardly exist. Yep – those were tough times.

The marvelous thing about this new take on “Caucasian” is the strength of the ensemble cast. Everyone has a day in the dust and grit of the landscape.

We are now living in a Brectonian world. The Princes of the World always have an axe to grind and our Princes in Washington’s high places should definitely see this play. After All — what happens to the people on the stage – could happen to them. Lofty Thrones are not always safe havens. The moral here is that there have always been corrupt judges and heartless lawyers in the Caucasian circle and in our current world.

There is plenty of slapstick and bizarre humor about the bourgeois – their greed and legal corruption. Young people, I think will grasp the comparison of then and now, and they will eagerly grasp the political importance.

The basic story is about a servant woman (Grusha) who meets a soldier that she begins to fall in love with. He goes off to war — and of course promises to come back. While he is gone – a governor gets killed during the constant rivalry and his wife gets all her finery together and flees – minus her newborn baby.

Grusha, the servant picks up the baby, keeps it alive and loves it. The servant marries a sick man to make the baby legitimate. Only, he doesn’t die – and she won’t sleep with him. The mother, who abandoned the baby comes back into the Afghan like landscape and demands that she give the baby back to her. The Servant refuses.

All of the actors play numerous parts. And that is a problem -trying to figure out who is what. Especially, since they basically wear the same clothes no matter if they are a prince or a pauper.

But one thing is very clear. This is an anti-war play. And I strongly suggest that Obama see it! It might enlighten him. You know — get back to that “The Change that we believe in.”

Sound familiar? – It’s in the script.

In Brecht’s script – the place is referred to as the “City of the Damned.” Isn’t that what we call Washington? Here is one of the double entendre quips: “I’ve been penetrated by Military forces!! Get it? Here’s another one: “You can always count on me to pull out!” Com’n, you know what there saying. Don’t act so naïve. This line is really great – and tells us a lot: A Princess says: “I love the people. It is just the smell of them that I can’t stand!”

AT THE AMERICAN CONSERVATORY THEATRE

GOD COULDN’T SAVE THIS MUSICAL

As a concert, this Mahalia musical has all the right ingredients. Great singing by the two main characters. Missing however is a large backup Chorus that would have enhanced the Mahalia experience.

Many of the songs that Mahalia sings were written by T.A. Dorsey – and they ‘shout out to the Lord’ — and get you in a happy, jumpy mood. Song’s like “I’m Gonna Walk All Over God’s Heaven” is one of those songs. And Jeanie Tracy delivers on most of the music – but on some, she seems to hold back. For instance the traditional Spiritual “Joshua Fit the Battle of Jericho” – could be so much better with a rousing chorus in the background. Then — “The Walls really would tumble down”.

The segment where Mahalia performs at Carnegie Hall is weak. You get no feeling of the excitement or the atmosphere of being in Carnegie Hall. Tracy shows what she can do with her wonderful voice – and brings the show to life with a vibrant “We Shall Overcome”. Listen, Tracy has a lot on her plate in this show. She has to sing over 26 songs — remember lines (she narrates) the Mahalia story. She has to walk up and down stairs, which looked like it was uncomfortable. Tracy is a full figure gal.

Here’s what I think that would save this musical. Get more people on the stage to increase the excitement. The sound system is great as is – but more interest would be created with better staging. Also – I really believe that another actor to the side of the stage should tell the story. Let Tracy Sing – and she will have less to remember. As is – it is a burden for any actress or singer to remember two hours of dialogue plus sing 26 songs.

Her cohort John “Jambi” (Jam-B) Borens plays many roles (Cousin Fred, Pastor Lawrence, Blues Man, Chicago, Thomas Dorsey, Francis and Martin Luther King Jr.) And – you know what? He is spectacular. His soaring voice takes us to new heights. Also, his speaking voice is loud and clear. He would make the perfect narrator. Then Tracy could concentrate on the music.

So – here’s Lee’s Formula to save this show: John “Jambi” Borens becomes Narrator of the story. Add more singers to bring out the true Gospel feeling. Let Tracy concentrate on delivering the magnificent songs – and let her get down and dirty with them. Shorten the musical by at least one-half hour. That will tighten the show and make it even more exciting. Do something with the Carnegie Hall part – to make it glitter. Like have Mahalia enter from stage (right or left) to Klieg lights that search the sky. Hey, you can rent them.

This could be such a wonderful happy evening of entertainment with some pruning, speed it up, add more people. Throw it all in a “BandBox” — and hooray – you will have a hit.

Others in the cast were Yvonne Cobb-Bey who plays Aunt Duke, and Mildred. She also becomes part of he chorus at times. More of her singing would also help. Charlene Moore is the talented accompanist. And John “Jambi” also plays the Hammond B3 Organ, and it is played through an authentic Leslie Speaker – and it was wonderful. Loved it!

AT THE LORRAINE HANSBERRY THEATRE

(((Lee Hartgrave has contributed many articles to the San Francisco Chronicle Sunday Datebook Pages. And he produced a long-running Arts Segment on PBS KQED)))