Cat On Hot Tin Roof Shocked In The 50’s 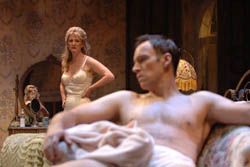 Times have changed. Nothing shocks us anymore. If Tennessee Williams’ award winning play were written today the ending would have been much different. Brick would have left Maggie and Skipper and Brick would have moved in together and adopted a baby. “Cat” created even more of a stir in London with censors. At that time homosexuality was still pretty much kept under wraps, except in the upper classes where sexual desires were a bit more open. However, a stage performance for the public sent them into a tizzy. Denied access to perform in a public theater – the show was moved to “private” clubs where you had to be a member to get in. All of this of course made more people curious about the play – and it’s fame roared across the planet.

A.C.T’s 50th anniversary of the play’s premiere is a far cry from the movie. Where the movie starring Paul Newman sort of danced around the fact that Brick’s buddy Skipper – discovers that he is Gay. And that Skipper and Brick had a deep relationship that had more meaning for him than the one with his wife. Maggie, his wife talks incessantly as she prances around half dressed to entice Brick to have Sex with her. Brick lets her know in no uncertain terms that he is not interested in sex with her and that he hates her. That doesn’t stop Maggie from nagging and dredging up the past – especially about Skipper.

Brick has very little to say in the first act, since Maggie talks non-stop – only to be distracted when the “little no-neck monsters” (the children of Bricks brother) run up and down the halls screaming and also running through the bedroom at “Big Daddies” house where Brick and Maggie have arrived for Daddies 65th birthday. I have to admit the kids are a real pain – especially if you are trying to work up a sexual situation. I would have said: – ‘Put those kids in the freezer!”

If you are familiar with “Cat On A Hot Tin Roof” – you know that this is not a happy family. Everyone seems to hate everyone and also hate themselves. I’m sorry to report that “Daddy” does not have a “Happy Birthday”. The Tension is unrentless.
What’s striking about this play is not just the scope of William’s writing – but the engrossing acting on the stage. Rene Augesen as Maggie manages to infuriate us while at the same time we feel sorry for her. This is a profound performance. Michael James Reed (Brick) is built like a Brick —- —-! I’ll let you fill in the blanks. This is not a by-the-numbers actor. Reed manages to show us many sides of a man, who grieves for his lost male friend. His performance is engrossing and moving. Katherine McGrath (Big Mama) performance is insightful and thought-provoking. In other words “Great”. Jack Willis (Big Daddy) who we meet later in the play is a forceful figure on the stage. Not only in looks – but he give one of the most triumphant performances of “Big Daddy” that you are ever likely to see. He is totally wonderful. Anne Darragh plays Mae – an irritating grasping fertile woman who is married to Bricks brother Cooper. Having seen Darragh in many plays – I would say that she has never been better. Perfect in this role. Rod Gnapp (Bricks Brother) plays Daddy’s least favorite son, who is scheming to get his hands on Daddy’s estate. His role is small – but his impact is crackling. And the Direction by Israel Hicks? What can be said except that he is inspired. Hicks managed to bring fresh new life to an old chestnut.

The Design team did a knockout job. They include set designer Ralph Funicello, and costumes by Sandra Woodall clearly invoke the period. The wonderful lighting makes all the difference in the world in the hands of Russell H. Champa and the sound designed by Fitz Patton was like velvet.

RATING: FOUR GLASSES OF CHAMPAGNE!!!! At the Geary Theater thru Nov. 13.

This just in. Producer David Stone told buzzin today that the new Tony Award Broadway musical “The 25th Annual Putnam County Spelling Bee” is going to make its West Coast premiere beginning on Feb 14, 06 at San Francisco’s Post Street Theatre. Spelling Bee was conceived by Rebecca Feldman and features music and lyrics by Tony winner William Finn (Falssettos, Elegies). This production will be directed by James Lapine (Sunday in the Park with George, and Into the Wooods) which I will be seeing again soon at TheatreWorks in Palo Alto. Tix will start selling on Oct. 26 at the Post Street theatre box office or on the web at www.ticketmaster.com. Here’s a valuable BLAST – a limited number of $25 lottery tix will be offered at every performance of “Bee”. Those Tix are available at the box office only. Winners must be present, with valid photo I.D. when their names are drawn. “The Tribute” now at the Post Theater will close on Jan 8.

Here’s a sexy idea. Next at A.C.T. will be
the Mamet play “Sexual Perversity in Chicago.” Can’t wait – you know that Mamet doesn’t mince words. It’ll be directed by Peter Riegert and starts on Jan 5.

A Reminder that it will be snowing on Market Street in front of the Orpheum Theater. The new annual favorite is selling out so fast that you might just find yourself out in the cold. Gee, wouldn’t it be a great P.R. thing to have some snowflakes drifting down on the patrons on opening night? It’s sure to get some press. And how much could a few bags of fake flakes cost?

Another Hottie! “Lestat” with music and lyrics by Elton John & Bernie Taupin begins doing it’s magic on Dec. 17 at the Curran Theatre as part of the SHN Best of Broadway Season. I plan to cavort and have fun when the Sun goes down. Do you think I could lay in a Coffin while I watch it?

“Dear Buzz.” Everything you write about seems to be about sex. Why is that?” — Dear. It’s because that is what the playwrights write about. And in case you didn’t notice – sex is what makes the world-go-round. Try it – you’ll like it!