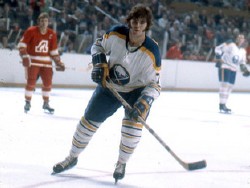 The hockey community is pushing back at a research group’s finding that retired player Rick Martin had early-onset chronic traumatic encephalopathy (CTE) when he died earlier this year of a heart attack at 59. Even though the face of the sport, Sydney Crosby, continues to sit out the aftereffects of his nearly-year-old concussion, and other recent hockey deaths do clearly link in some fashion to contact-induced brain degeneration, doctors and journalists from points north are right to be noting holes in claims by Boston University’s Center for the Study of CTE. To oversimplify only a little, tau protein buildup in brains is like plaque buildup around hearts – further study will surely show that it affects individuals with different intensities and at different rates.

That a debate so narrow should be bogging down general understanding of the sports concussion crisis is a crying shame – and also so unnecessary. Sadly, Chris Nowinski, not long ago one of the great public health advocates of his generation, seems to be devolving into a Concussion Inc. bureaucrat as he stubs his toe in defense of the research turf of Dr. Robert Cantu and colleagues. What we all could really use from Nowinski is a little less “peer review” pomposity and a little more common sense.

The hype that Martin’s so-called “stage 2” CTE would have led to Martin’s eventual dementia (“no question,” Nowinski said in one credibility-crippling sound bite) is “incomplete … fragmented,” neurosurgeon Dr. Charles Tator told Randy Starkman of the Toronto Star, adding: “We need more science and less grandstanding.” The intellectual rift between hockey doctors and the Boston group was further explored in a very good three-part series by Yahoo Sports’ Nicholas J. Catsonika.

Let me be clear about my own position. I think the pattern of CTE – that new and more all-encompassing nomenclature for what once was known only in ex-boxers, as “punch-drunk syndrome” – is unmistakable in football players especially. But in the course of chasing research dollars (including the National Football League’s not-so-unrestricted $1 million gift to the Boston center), Nowinski has pushed the envelope in the Martin case and undermined the larger cause.

We don’t need this non-scientific spokesman, with his own scary brain-sloshing experience and testimonials from college football and World Wrestling Entertainment, fronting for narrow institutional interests. We need him leading from the bully pulpit on the heart of the matter: ending the annual carnage of disability and death – including but not limited to traumatic brain injury – in the football programs of our public high schools.

To reduce the whole shootin’ match to “CTE or no CTE?” is to give away the game just when the good guys’ team was building momentum. There is a known heavy toll in other injuries sustained by young people in pursuit of American gladiatorial bloodsport: strokes, seizures, aneurysms, brain bleeds, subdural hematomas, and, lest we forget, spinal injuries, as well as garden-variety concussions. (Never mind steroid abuse: that horse is so far into the next county that the barn door has petrified.) These add up to a significant public bill, whose significance would be even better grasped if Nowinski’s mentor, Cantu, would compile catastrophic injury reports as comprehensively as my colleague in independent journalism, Matt Chaney.

It would also help if the Boston crowd stopped giving aid and comfort to the fiction that football safety measures and baseline neurocognitive testing were real solutions at the Pop Warner and prep levels. The former undoubtedly can reduce the volume of serious injury and death at the margins. The latter is part of a sham, preying on football-mania, to turn the whole crisis into a marketing opportunity for frauds like the pushers of the University of Pittsburgh Medical Center-developed “ImPACT concussion management system.”

Three weeks ago a Senate Commerce Committee hearing bragged that it was zeroing in on the false pitches to parents by “anti-concussion” marketers. Yet Senator Tom Udall and his colleagues gave a pass to the biggest predator of all, ImPACT. (The company’s founders, including Pittsburgh Steelers and WWE doc Joseph Maroon, have received millions of dollars in National Institutes of Health grants; Maroon is a campaign contributor to Commerce Committee chair Jay Rockefeller.)

Last week I published internal ImPACT documents proving that, when they’re trying to close deals with doctors and school districts, company marketers even say to hell with baseline testing itself. (ImPACT claims that its “normative database” of responses to sophisticated variations of the question “how many fingers am I holding up?” makes baselines a good idea but “not necessary.” Especially, I’m guessing, if the client school athletic department wants to cut corners while still representing to potential litigants that they’re doing “something.”)

I asked the Cantu group for comment, but none was forthcoming. I suppose even post-concussion testing minus baselines is better than two-a-day scrimmages in the bright sun. That still begs the question of how much ImPACT and associated mumbo-jumbo are costing our schools, and to what end.