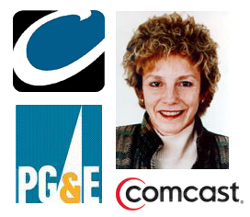 As State Senator Carole Migden gears up for a tough re-election fight against Assemblymember Mark Leno, she has made some interesting new allies: Pacific Gas & Electric (PG&E), Clear Channel, and Comcast. These three corporations sponsored Migden’s February 22 celebration of Black History Month at Powell’s Place Restaurant, and are strange bedfellows for a candidate seeking progressive support against Leno. Migden’s alliance with PG&E comes as the San Francisco Bay Guardian revealed that the utility giant is considering a November ballot initiative to preempt small public power projects in the city. Clear Channel, the network that owns 9% of the nation’s radio stations, is primarily identified with right-wing talk radio and media consolidation, which will not help Migden in the June 2008 Democratic primary, while Comcast’s monopoly over cable television in San Francisco makes it among the city’s least popular corporations.

With San Francisco facing a mayoral election in November and a statewide presidential primary race in February, a June 2008 State Senate primary seems a long way off. But Assembly member Mark Leno is set to announce his candidacy for State Senate on March 2, and incumbent Carole Migden is already moving into campaign mode.

Last week, I received multiple press releases from Migden’s office highlighting her work after not getting any such announcements for years. Migden is apparently becoming more visible at district events after being largely invisible since being elected to the Senate.

Part of this new visibility campaign was her dinner honoring six “outstanding community leaders” for Black History Month. The Host Committee for the event included two names—District Attorney Kamala Harris and Commissioner London Breed— who are Leno delegates to the state Democratic Convention.

But Migden may regret going public with an event sponsored by PG&E, Clear Channel, and Comcast. No politician has won the Bay Guardian endorsement after allying with PG&E, and the particular timing of Migden’s identification with the utility giant was unfortunate.

In a story this week by Amanda Witherell (“Forestalling a public power ballot push”), the Guardian reported that PG&E is considering a November ballot measure to rein in public power in San Francisco. Supervisor Ross Mirkarimi is quoted in the article stating that PG&E is heading “toward a significant confrontation over the energy business.”

Migden would no doubt oppose a PG&E-backed anti-public power initiative, but running ads highlighting the corporation’s support for black history helps PG& E enter the November election with a more liberal image. If PG&E were not simultaneously planning an attack on public power, this image boosting would be harmless; given its actual agenda, politicians should not be trying to make the utility look good.

Migden’s alliance with Clear Channel is also curious for someone seeking progressive votes. Clear Channel is widely known for its role in media consolidation, as it went on a buying spree that resulted in it owning 9% of all radio stations in America. Many are part of the right-wing noise machine, and corporate headquarters determines what music America listens to by dictating to local stations what songs they must play.

After this article was initially posted, I was informed by a Clear Channel representative that the entity sponsoring Migden’s event runs billboards, and is now legally distinct from the other Clear Channel. But it is unlikely that many in the public know of this distinction.

As San Francisco’s monopoly provider of cable television, Comcast has its share of critics. Although a State Senator may not be in a position to impact Comcast’s business, few district voters would want their representative seeking favors from a corporation widely viewed as unresponsive to its captive customers.

The reality of American elections requires politicians to raise money from those who have it. Candidates often receive unsolicited donations from corporations or individuals of divergent agendas, and no quid pro quos are involved.

But State Senator Migden solicited the help of these three corporations for her event.

While some assumed that Leno would not challenge Migden after a term limits initiative extending his tenure appeared likely to qualify for the February 2008 ballot, this is not the case. Insisting that his challenge is “not about extending my political career, but rather ensuring the best Senate representation for the district,” Leno has scheduled a press conference to announce his candidacy for Friday, March 2, at noon at the Yerba Buena Gardens Esplanade near Mission Street.

If you think that the Clinton-Obama battle has already gotten personal, wait until you see the Leno-Migden race. Leno got his start in politics raising money for Migden, but then felt betrayed when she endorsed Harry Britt against him in the 2002 Democratic Assembly primary.

Like Clinton-Obama, the Migden-Leno race is both ideological and personal. With Leno likely to have the advantage among progressives, Migden’s courting of corporations like PG&E may be a politically strategic move.