Can SF Progressives Elect a Board President? 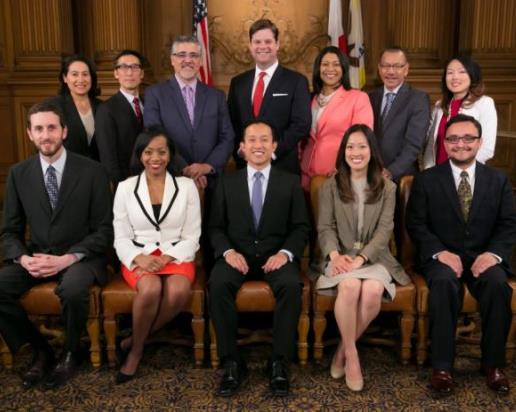 Supervisor David Chiu’s political power play to select an interim Board President in former rival David Campos’ absence proved to be much about nothing. Katy Tang won unanimous backing for the one-week position, but is not a top contender when the Board makes its permanent choice on January 9.

Some believe that Chiu would not have gone to the trouble to elaborately orchestrate an interim selection without hoping he could insert close political ally Scott Wiener into the position. But Wiener couldn’t get the six votes, so Tang became an easy fallback.

Now the question is who will become the permanent Board President. And I’ve been surprised by how many political insiders are unaware of the position’s biggest power: appointing nearly half the commissioners to the Planning Commission, Board of Appeals, Building Inspection Commission and other bodies.

Some of these bodies make critical decisions impacting tenants and the preservation of rent-controlled housing. So from a tenant and progressive perspective it is vital that the progressive supervisors unite to select one of their own as the next Board President.

Since district elections resumed in 2000, the Board Presidents have been Tom Ammiano, Matt Gonzalez, Aaron Peskin and David Chiu. The first three were 100% pro-tenant and Chiu was a solid tenant vote on rent control and eviction issues (though not on related issues like Parkmerced redevelopment and Airbnb).

Tenants could suffer if Mark Farrell or Katy Tang, both of whom opposed Prop G and every other tenant protection measure, became Board President. Their appointments would likely promote landlord interests and view tenants just as unsympathetically as the supervisor that chose them.

If Supervisors Avalos, Campos, Kim, Mar, Yee and the future District 3 appointee unify behind a single candidate, progressives will elect the next Board President.

But this is easier said than done.

The problem is a lack of internal communication and trust. The Board does not have an Aaron Peskin who stays in touch with colleagues and is effective at gathering progressive votes on key issues.

For example, even his progressive colleagues do not know whether David Campos made a deal  to support Farrell for Board President in exchange for Farrell’s endorsement of Campos’s Assembly campaign. I find it hard to believe Campos would make such a deal, as it would mean he put his personal interests ahead of the broader progressive movement. But many think he would do so, and that he did.

Absent such a deal, the six supervisors need to unify behind a Board President who will protect tenant and progressive interests. Because when a speculator wants to displace longterm tenants through bogus renovation plans, it is the Board President’s appointees to the Planning Commission and Board of Appeal, not the Board Supervisors, who helps decide.

Assuming progressive unity, the next Board President will be Campos, Kim or Mayor Lee’s District 3 appointment. Campos could get it if he secures Farrell’s support, which would mean that Farrell stays as Budget Committee chair. Farrell has done a good job in that position. But I see Campos as the least likely of the top three to get the position.

This leaves it between D6 Supervisor Jane Kim and the D3 appointee. Kim certainly deserves the position, but may be unable to secure six votes. Kim did a robo call for Chiu, and may have lost Campos’s support as a result.

Strange as it sounds for a Board newcomer to become the President, but that’s exactly what happened when David Chiu celebrated his first Supervisor’s meeting by being elected Board President.

The Board President selection is the first real test of the tenant movement’s ability to protect its political interests since the loss of Ted Gullicksen. If Ted were here, all I needed to do was email him to confirm he would be meeting with all of the progressive supervisors to ensure that none backed a President who did not support tenants.

Ted never failed to be there for tenants but now others need to fill his large shoes. The Board Presidency is critical to tenants for while there has not been a recent high profile tenant-landlord conflict at Planning or the Board of Appeal, that can change at any time.

In the current climate of skyrocketing rents and devious efforts to evict longterm tenants, progressives need a Board President who is on tenants’ side. Activists need to be talking to their supervisor allies now, as many will be gone over the holidays and the January 9 vote is approaching.