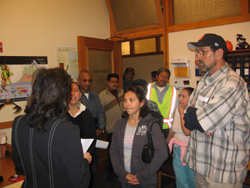 San Francisco progressives have spent decades in a multi-front battle against gentrification. The struggle to prevent the displacement of low-income working people from the city has led to rent controls and eviction protections, zoning restrictions, highrise limitations, inclusionary housing, and a constant push for truly affordable housing. But stopping gentrification alone does not make low-income neighborhoods desirable, or even livable. In San Francisco, neighborhoods that have defeated gentrification have been treated as “containment zones,” meaning that unreasonable levels of crime, violence and drugs are tolerated so that such activities do not spread to upscale areas. The Tenderloin has long been one of the city’s leading containment zones, but those days are over. A large contingent of residents, workers and merchants will be delivering this message to city officials today, in a March for Safety that heralds a new chapter in the Tenderloin’s—and San Francisco’s—history.

While San Francisco progressives have passed laws to slow gentrification, we have not transformed our non-gentrified neighborhoods into safe and desirable places to live. The Mission District comes closest to achieving this goal, but Bayview-Hunters Point and the Tenderloin have been long afflicted with public safety problems that has left residents living in fear and looking for a way out.

San Francisco’s low-income residents should not have to choose between displacement and living in a crime-ridden ghetto. If the end game for progressive efforts to prevent gentrification is a neighborhood where poor people are afraid to live, and desperately want to leave, then our strategy has failed.

In 1985, Tenderloin community leaders joined with Mayor Dianne Feinstein in a March Against Crime. We believed the neighborhood was on the precipice of dramatic and positive change; we did not realize that Reagan Administration budget cuts and policy changes at the federal level would soon devastate our community.

Reagan not only decimated spending for affordable housing (a price America still pays through widespread homelessness), but threw hundreds of thousands of SSI recipients off the rolls on the grounds that they were not disabled. This caused great distress among longtime Tenderloin recipients of SSI, and the community lost some of its key leaders (a federal court ultimately invalidated Reagan’s action, but the damage was done).

It took until the mid to late 1980’s for the full impact of Reagan’s 1981 budget cuts to hit the Tenderloin. National, state and local economic problems from the late 1980’s through the mid-1990’s left the community without the resources it needed to weather the federal spending cuts.

It has taken the Tenderloin over twenty years to get back to where it was in 1985. But the pieces are again in place for the community to become a national model of a safe, desirable and permanently low-income neighborhood.

What are these pieces? Critically, and most importantly, increased resident involvement. There are three components responsible for this.

First, the proliferation of nonprofit-run housing has increased resident stability. People believing they will be in the Tenderloin longterm, are more willing to get involved in solving the neighborhood’s problems.

Second, a large number of residents live in properties managed by the Tenderloin Neighborhood Development Corporation and the Tenderloin Housing Clinic (which I head). Both groups are actively working to get residents involved in the community, and have found a very positive response.

Third, changing demographics has transformed the Tenderloin into a major home for Latino families with children. La Voz Latina de la Ciudad Central has been working with these families to improve community safety, building the base of resident involvement.

While resident involvement is essential, improving the livability of low-income communities requires the constructive involvement of property owners and merchants. The North of Market Community Benefits District (CBD) created a vehicle for such involvement, and owners responded.

The Tenderloin now has the most organized group of property owners/merchants in its history. Even institutions like Hastings College of the Law, which long ignored the Tenderloin, have decided to become part of the solution.

Because the CBD required all property owners, including nonprofits, to contribute funds, it created a psychological incentive for enhanced community involvement. People felt that since they were paying extra money to improve the Tenderloin, that they ought to make sure it was well spent. This meant ensuring that the city was stopping the Tenderloin from continuing to be a containment zone.

With those who live, work or own property in the Tenderloin on board, the key question is whether San Francisco’s political leadership is truly committed to improving the neighborhood.

One measure of Newsom’s commitment could be the huge influx of police into the neighborhood following two shootings on Hyde Street in recent weeks. While the police cannot alone solve the Tenderloin’s crime problem, and the recent crackdown on drug dealers is only temporary, in the wake of the murders the community needed reassurance that City Hall was paying attention.

The community got this reassurance. And since the murders, widespread drug dealing on Hyde Street and Golden Gate Avenue is dramatically down, and has been reduced throughout most of the Tenderloin.

A chief goal of today’s March against Crime is to keep it that way.

Some argue that Tenderloin activists will simply move the drug dealing to other neighborhoods. What’s wrong with that?

Over twenty San Francisco neighborhoods have little or no sidewalk drug dealing because such activities have been “contained” in the Tenderloin. San Franciscans would never accept a policy that forced people of a specific race to endure a disproportionate amount of crime, so why perpetrate such disparate treatment based on people’s economic class?

If it were Tenderloin residents primarily selling the drugs, then the “containment zone” argument would fall flat. But nobody disputes that dealers are coming here from outside the neighborhood (and the city) because the Tenderloin has for too long been viewed as a place where anything goes.

We know the social, racial, and economic causes of systemic crime. But arguing that Tenderloin residents should accept living in fear until progressive nationwide employment policies is elitist, and in no way “progressive.”

SFPD Chief Heather Fong seems to only gets publicity when her Department screws up. But she deserves credit for giving the Tenderloin the best leader it has ever had in Captain Gary Jimenez. This guy appears to live and breathe crime fighting, and has inspired confidence that the police are behind the community.

The 2007 March for Safety offers a critical opportunity for opponents of the city’s gentrification. The Tenderloin offers the perfect case study for showing that San Francisco’s low-income, non-gentrified communities can also be highly desired places to live.

Some may doubt that such a vision is possible. Those of us in the Tenderloin disagree, and believe the neighborhood can still become a national model of a low-income community with a high quality of life.