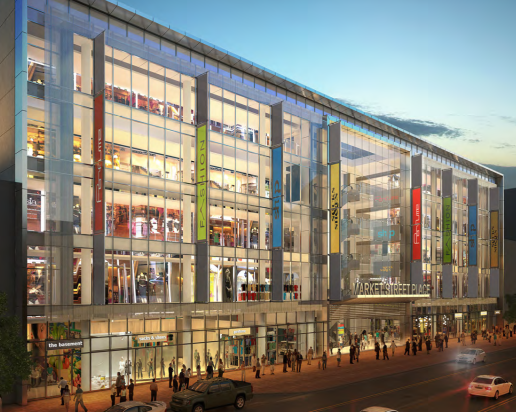 In 2007, well before any tech company considered moving to Mid-Market, a project was proposed that I thought would be the linchpin of Mid-Market’s revival. It was called CityPlace. The brainchild of developer David Rhodes, CityPlace offered retail shopping for the working and middle-class. It would also fill a long derelict space in the tough stretch of Market Street between 5th and 6th Streets that was in close proximity to the first block of Turk, then the worst part of the Tenderloin.

On June 1, 2010, I wrote an article castigating the Planning Department for its delaying approval of the CityPlace project. I noted how a single member (no longer  on the Commission) engineered a lengthy and unnecessary delay, and described how a project projected for a fall 2009 groundbreaking would at best start in the fall of 2010, ” a year late.”

It didn’t work out that way. Rhodes lost his financing in the aftermath of the 2008 fiscal crisis. At the end of 2011 Twitter announced it was coming to Mid-Market. Tech, tourist hotels, and theaters became the driving force for revitalization rather than a shopping center.

I had been told (mistakenly, in retrospect) in June 2014 that new owner Cypress Equities was about to build the renamed Market Street Place. But while structures were cleared, construction still did not commence.

At a November 12 groundbreaking featuring Mayor Lee, D6 Supervisor Jane Kim, and Cypress Equities CEO Chris Maguire, optimism was in the air. Maguire told me before the event that there has been “a lot of retailer interest in the space,” and that the retailers who move in will be “closer to Uniqlo than JC Penney.” I had mentioned those businesses to him because prior owner David Rhodes had sought to entice Uniglo to make CityPlace its first San Francisco location. Later reports had JC Penney becoming a possible anchor tenant.

Maguire described the six level project as having multiple tenants on each floor. Cypress wants to “take its time to get it right,” and will lease to a diverse range of retailers, including restaurants.

Maguire is a tall Texan with thirty years in the retail business. If anyone can make retail work in Mid-Market, he can.

Mayor Lee reminded everyone that Market Street Place was moving forward when Mid-Market had been stagnant for decades. Now, the new shopping center will be the eastern point of a stretch of Mid-Market that extends to Twitter’s home at 9th and Market.

In three years, a street devoid of much investment for nearly fifty years has experienced a remarkable transformation Kudos to Cypress Equities for having the confidence to move forward, and for soon turning Mid-Market into the shopping hub that it was  long hoped to be.