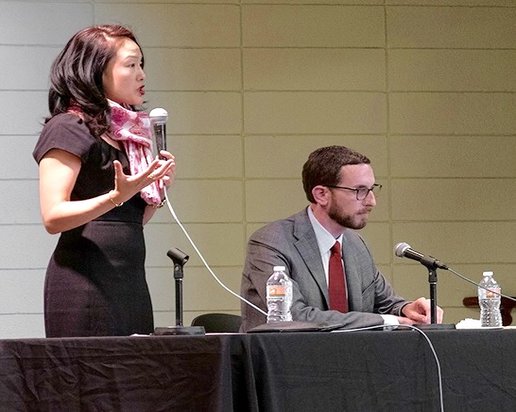 San Francisco’s State Senate race between Jane Kim and Scott Wiener is the city’s marquee November matchup. Even pundits (like myself) who picked Kim to ultimately win this election did not think she would prevail in June, but she did. Kim’s stunning success has led Wiener to take a more aggressive approach, raising questions as to whether these two hard working elected officials can let their respective visions decide the race and avoid going negative.

The votes had barely been counted when Kim asked Wiener to agree to run what she defined as a “positive campaign.” According to Kim, “That would mean no personal attacks or mentioning each other in paid advertisements. She noted Wiener refused to sign the pledge, and instead launched “a string of misleading and false attacks on me and my record.” Kim sees Wiener’s messaging as part “a negative campaign.”

Wiener disagreed. He wrote on June 28 that Kim “insisted I sign a politically self-serving agreement under which I would be prohibited from talking about her record. Prohibited from ever saying a word about how she has voted and what positions she has taken. Prohibited from even mentioning her name.” He then offers a different definition of negative campaigning: “Kim couches this draconian and anti-democratic gag order as a pledge not to engage in ‘negative campaigning.’ Under Kim’s rationale, Hillary Clinton would be prohibited from talking about Donald Trump’s crazy proposal to ban Muslims from entering our country. Huh?”

Wiener’s campaign manager Jeffrey Sparks followed this up in a June 29 letter claiming Kim ran “an intensely negative, false, and misleading campaign against Supervisor Wiener in the primary.” Sparks said that Kim’s June campaign was “neither complete nor accurate” in five key areas, including her support for renters, women and housing.

Is pointing out your opponent’s record “negative” campaigning? Or is it the best way for candidates to distinguish themselves from their opponents? Some would argue that the distinction does not even matter; but the cynical state of our current political culture shows more powerfully than ever that it does.

I agree with Wiener that there is nothing wrong with telling voters how your opponent voted on an issue. That’s a central part of our election process. People want campaigns to be run “on the issues,” and the public needs to know where Wiener and Kim stand on the policies they will be shaping in Sacramento.

But Kim’s proposal was not really about stopping Wiener from mentioning her record. Her campaign had to know that was a non-starter. Instead, Kim’s team foresaw after her strong June showing that Wiener would be coming after her, and they used the proposal to send a larger message about the nature and tone of the November campaign.

When candidates prioritize undermining their opponent’s record over promoting their own—-see Bush v. Dukakis, 1988—-you have the quintessential negative campaign. Negative campaigns are unhealthy for the body politic for two main reasons.

First, they can result in the election of a candidate with no clear vision or agenda. We are currently seeing a version of this in the aftermath of Brexit, as the entirely negative messaging of the “Leave” campaign has left its leadership in post-election disarray. When you go negative and win, there is no mandate for future action.

Second, negative campaigns increase public cynicism about the impact of elections. This decreases voter turnout and results in electoral outcomes that increase social and economic inequality.

Negative campaigns produce choices between “the lesser of two evils.” That’s not good for progressive interests that typically need government action to achieve their goals.

The Kim-Wiener race is San Francisco’s best chance this November to send a message about where it wants to go as a city. We have two candidates with accomplishments across multiple issue areas and sharp policy differences. Both are powerful spokespersons for causes they back.

This race is also special because Wiener and Kim both believe their positions are shared by a majority of the electorate (which includes a fraction of San Mateo County). Unlike candidates who feel they must downplay or erase key positions because they are unpopular with voters, Wiener and Kim are proud of their divergent stands and feel they have broader voter support.

The last time San Francisco had a citywide race with strong competing candidates was Mayor Ed Lee’s resounding victory in 2011. Five years later, Scott Wiener and Jane Kim have a chance to run positive campaigns about the future of the city.

It’s in everyone’s interest for this election to be about competing visions not which candidate’s negative attacks have worked best.