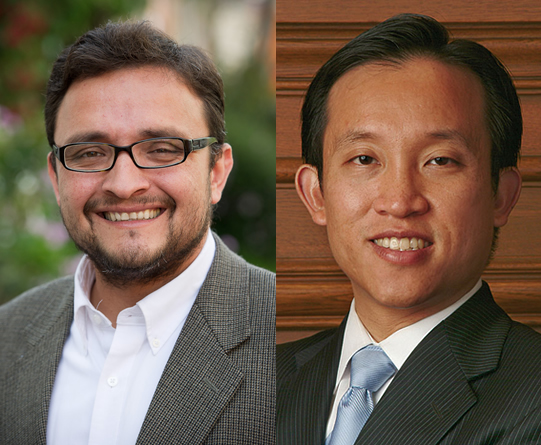 For all the mailers, endorsements, and negative attacks on both sides, the Assembly race between David Campos and David Chiu offers an unusually clear choice.

There is nothing complicated about the race for Assembly between Supervisors Campos and Chiu. Unlike some campaigns, both are running on, rather than away from, their records. Yet because the June election is only a prelim to November, both sides must continue to spend money convincing voters that their initial assessments about the candidates are correct.

Not a Citywide Race

The single biggest factor in understanding this race is that it is not citywide.

To put it another way, the San Francisco voters who are in Assemblymember Phil Ting’s district would likely vote at least 65%-35% for the moderate/progressive David Chiu. Assemblymember Tom Ammiano’s district is much more progressive than the city as a whole, which gives Campos a major advantage.

Because the race is not citywide, organizational and individual endorsements mean much less. This contest increasingly reminds me of the Agnos-Molinari mayoral race of 1987, where Agnos had the troops on the ground while his opponent kept promoting major endorsements (Agnos won that race in a landslide).

I understand why Chiu is promoting his backing from LGBT publications like the Bay Area Reporter, organizations like the Alice B. Toklas Democratic Club, and LGBT progressives like Deborah Walker. But I’ve seen enough San Francisco elections to know these endorsements do not matter. Campos is going to get the overwhelming number of LGBT votes because keeping this Assembly seat in LGBT hands is an overwhelming priority for this community.

In assessing this race in January, I wrote “it is no secret that some LGBT voters whose politics are closer to Chiu’s will be voting for Campos…Some longtime LGBT activists see Campos’ election to the Assembly as critical for maintaining the building blocks for LGBT political power in the city.”

Campos has unified LGBT voters despite Chiu’s high-profile LGBT endorsements. The enthusiasm for Campos is particularly high among younger LGBT activists not around for the battles to elect LGBT candidates in the 1980’s and 1990’s. They are infusing the Campos campaign with the type of energy seen on the eastside during Tom Ammiano’s 1999 mayoral campaign—with the advantage that the Assembly contest is not a citywide election.

Like Jack Molinari’s 1987 mayoral campaign, David Chiu has put his faith in endorsements and mailers to sway votes. One does not see much energy on the ground, which is not a good sign in a low turnout June 2014 election.

This race began in a very different political environment. The game-changer was theLee family eviction, which brought Mayor Lee into the campaign to stop speculator evictions under Ellis. The September 2103 rally to stop the Lee evictions became the first in a growing activist campaign that has put evictions at the center of eastside voters’ consciousness.

An election about tenants rights and evictions plays to Campos’ strength. While Chiu has a good tenants rights record, it remains tarnished by his deciding 2011 vote in favor of Parkmerced’s demolition and redevelopment.

Chiu wanted this election to be about his greater ability to enact laws and work collaboratively with fellow legislators, key skills necessary for success in the Assembly. He also saw Campos as vulnerable for his votes reinstating Sherriff Ross Mirkarimi and against the Mid-Market/Tenderloin payroll tax exemption, two positions overwhelmingly opposed by San Francisco voters.

But eastside voters do not appear to care very much about any of these Chiu strengths. And excitement over a candidate’s ability to work with fellow Supervisors does not get people spending their evenings and weekends knocking on doors or making phone calls for your campaign.

I will hold off on my sense of the June outcome until my Election Predictions column on June 2. But as I have said before, I don’t see how Chiu wins in November if he does not finish first in the lower turnout June primary.

The reason is that some are donating to Chiu solely because they believe he will win. If Campos finishes first in June, these donors will switch to him.

A major dynamic in this Assembly race is the influence of pro-Democrat Sacramento interest groups. These groups, which include labor unions, trial attorneys, and environmental organizations, want to make sure they are on the winning side of the Campos-Chiu race. If Campos wins in June, all of this money will flow to him for November while Chiu’s donations will dry up.

Chiu understands the stakes, which is why he is ramping up his campaign with three weeks still to go before the election. But he will not be able to shift the debate back toward the issues where he is strongest, which leaves him an uphill battle.