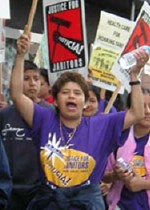 For all its pain and disarray, the present moment offers a rare opportunity to effect political change that is profound, lasting and equitable. But can California progressives summon the vision, craft the policy and — most daunting — do the politics required to seize that opportunity? That question provided the overarching theme of the The Great Transition, otherwise known as the 2009 Building Workforce Partnerships Conference, held last week at the San Jose Hilton. What I saw and heard there left me thinking that the answer to that question may be yes.

Organized by the California Labor Federation in concert with sixteen other organizations, including the Apollo Alliance, State of California workforce and employment agencies and the California EDGE campaign, the gathering attracted nearly 500 people — mostly union activists, but also public officials, workforce professionals, environmentalists, business representatives and others. For two days they engaged in intense dialogue about the prospects of effecting structural democratic change.

Five plenary sessions addressed in turn the challenges of the new (?), new economy; how we got into the great recession and how we can get out; FDR’s likely course in the current economic crisis; the prospects for a Green New Deal; and the forging of workforce-based coalitions in New England, New York and Oregon.

In between the plenaries, five to eight concurrent workshops delved into nuts-and-bolts subjects ranging from the future of the Workforce Investment Act to what the Concord Naval Weapons Station Reuse Project has to teach us about high road green development to the potential for communities, universities and organized labor to collaborate in the creation of green collar jobs, as demonstrated by the retrofitting of 1,000 City of Los Angeles buildings by participants in UCLA’s Community Scholars Program — to mention just a few of the twenty-four wide-ranging workshop topics.

Besides the breadth of discussion, what impressed me was the high level of discourse generated by the plenaries’ distinguished speakers — Dean Baker, Carl Pope, Phil Angelides, Cindy Chavez, Thea Lee, Christine Owens, James Galbraith and Manuel Pastor, among others — as well as the workshop presenters and the conferees at large. In particular, I witnessed an admirably low tolerance for cant.

It was refreshing, for example, to see the “green” economy brought down to earth, specifically the terrain inhabited by working people. There’s a widespread assumption that green employment means good, middle-class jobs. Not necessarily so, said plenary speaker Greg Leroy. Instead, “the emerging green economy is a mixed bag.” LeRoy cited a report recently conducted by the organization he directs, Good Jobs First, that studied three industries where significant green job growth is anticipated: manufacturing, construction and recycling.

Emphasizing that there are only two reliable predictors of job quality, unionization and and job quality standards, LeRoy said that while some green employers are open to collaboration, others “pay poorly and fight unions.” He also noted that there are no labor standards in the U.S. Green Building Council’s LEED [Leadership in Energy and Environmental Design] popular certification system. Good Jobs First urges labor, community and environmental leaders to come together with elected officials to see that green jobs are also good jobs.

A gap between rhetoric, however well-intentioned, and reality, along with ways to close it, also became apparent in the workshop dealing with California’s implementation of President Obama’s new unemployment insurance and community college initiative. Announced on May 8, this program expands dislocated workers’ options by calling on the states to ensure that people can participate in community college and degree granting programs while they collect unemployment benefits. It also calls on community colleges to use their discretion in waiving income guidelines so unemployed workers can qualify for the federal government’s Pell Grants to fund their studies.

The workshop featured speakers from the National Employment Law Project, the U.S. Department of Labor, the Community College League of California and the State’s Employment Development Department (EDD). All of them stressed the difficulty of implementing the President’s program in the context of the state’s fiscal collapse and economic meltdown: California is now experiencing record rates of long-term unemployment. Over two million people — 11% of the state’s workforce — are out of work, and 27 percent of all unemployed workers are out of work longer than six months. The upshot is a staggering demand for state assistance. In response, EDD is hiring hundreds of full-time and temporary staff to deal with unemployment claims.

Meanwhile, the California community college system budget is being cut by $825 million — a reduction that is expected to keep 250,000 prospective students out of community college. Already overwhelmed by rising enrollments and severe under-funding, the college system’s financial aid officers are unable to take the individualized approach to Pell Grants mandated by Obama’s initiative (these grants go to students, not educational institutions.)

During Q & A, another difficulty was raised by Adrienne Siffin – chair of SEIU Local 1000’s EDD Task Force. Since 1995, when the state eliminated EDD’s Unemployment Insurance field offices, dislocated workers seeking help in applying for unemployment benefits in California have been unable to get face-to-face help. The only way to apply for benefits is online or over the phone. Some workers don’t have a computer; others do but need personal guidance.

With huge numbers of would-be applicants dialing in, tens of millions of phone calls have gone unanswered. Diverted to a pre-recorded message, people call back dozens of times, further burdening the phone system (and EDD’s budget) but still failing to reach live staff. Siffin said that EDD has placed phones in One-Stops, whose offices are open to the public, even though the One-Stops’ charge is providing career services and worker training, not unemployment insurance. As frustrated people flock to the One-Stops, the career centers “have actually become dangerous places to work.”

Clearly, building workforce partnerships is going to require considerable effort. But the first step, taken here, is to acknowledge the issues that separate parties who ought to be allies. Another such acknowledgment occurred at the very end of the conference, when the last question posed to the final plenary panel came from 22-year-old Nicole Charles.

Describing herself as a member of the Ventana Chapter of the Sierra Club, Charles said she had just graduated from college and couldn’t find a job, in part, she surmised, because boomers aren’t retiring. “I want to be part of this movement,” she said, and asked the panelists, who included Sierra Club Executive Director Carl Pope, how she might accomplish her goal. One of Pope’s fellow panelists, James Galbraith, responded by proposing that the Obama administration create a jobs program for youth.

Charles touched on an issue that had already been informally broached at the conference more than once. The dire state of the economy and, more precisely, of many 401(k) accounts, has meant that numerous older workers are putting off retirement. That’s creating an age gap in the workforce and the union movement. In the trades, it’s limiting the number of new apprenticeships, which are tied to actual job openings.

Perhaps the challenge of building partnerships between youth and age will be on the agenda of next year’s conference. In the meantime, the California Labor Federation and its fellow sponsors of the 2009 event should be thanked for having increased the chances that “the great transition” will lead to a future that is not only very different from the present, but also far more just.