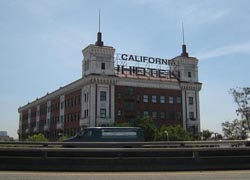 On August 6, 53 residents of the California Hotel filed a $53 million claim against the City of Oakland – believing that some city officials may have been involved in a scheme to violate their rights.

Under the regulatory agreement between California’s Tax Credit Allocation Committee (TCAC), Oakland Community Housing, Inc. (OCHI), and CaHon Associates, the regulatory agreement involving low-cost loans provided that OCHI agreed to provide low-income housing to the tenants of the California Hotel for a 30 year period. The TCAC agreement has recently been violated after OCHI and some city officials moved to force the existing residents out of the old historic hotel, and threatened to cut off the water, gas and electricity to the premises.

John Murcko, the attorney representing the residents of the hotel believes that Oakland’s Community & Economic Development Agency (CEDA) employees Sean Rogan and Marge Gladman directed the John Stewart Company and their employee Laura Sanborn to stop leasing units at the California Hotel, after tenants moved out beginning June 2007. Murcko believes that Sanborn did what she was told, who’s actions thus resulted in an economic crisis at the hotel, with Sean Rogan following through with a scheme to try and buy the tenants out after the staged crisis took effect.

Based upon information and belief, attorney John Murcko also believes that CEDA employee Sean Rogan directed the John Stewart Company and CaHon Associates to pull out of the hotel by July 15, as further incentive to unlawfully frighten the poor, elderly and disabled residents out of their housing.

Since July 15, the residents of the California Hotel have been managing the building, while providing their own security, grounds keepers and maintenance workers to keep the premises habitable.

As recent as July 21, at the direction of CEDA, the California Hotel was raided by a team of 8 police officers and numerous inspectors searching for code violations that may later be used as a pretext to shut down the California Hotel. After they found over 100 code violations left behind by the John Stewart Management Company, CEDA employees have joined Oakland building inspectors and the Fire Department with members of the Mayors Office to figure out their next move, Murcko believes.

“We hope to start providing some money to get the hotel placed into receivership so that the building may be properly managed and maintained for the residents of the hotel,” said Murcko. “The tenants have been wronged and by filing the $53 million claim against the city we hope to get the building back on track to serve it’s residents with dignity and compassion.”

Under California Government Code 912.4 the city has 45 days to respond to the $53 million claim filed by the residents of the California Hotel.

Lynda Carson may be reached at tenantsrule@yahoo.com