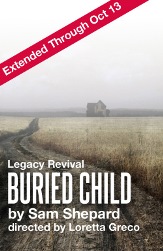 BURIED CHILD is one of Sam Shepard’s amazing stories. He won a Pulitzer Prize for Drama. And from that, he became one of the nations most exciting playwrights.

“Buried Child” tells us the story about a family that is falling apart rapidly. It shows us how a traditional family can have a breakdown that will break your heart.

There are two sons (Tilden and Bradley). Both sons are handicapped – Tilden emotionally and Bradley physically. Neither can take care of their parents. If there was an American Dream here — it’s not the American Dream. It’s a horror story.

They live on a farm. The house is a mess. No one takes care of it. Some of the Boys are mentally disturbed. They are supposed to take care of the crops around the Farm, but nothing is planted. Their father (Rod Knapp) is pissed off with his kids. He drinks a lot — and he tells them to leave him alone with his bottle of whiskey. He was at one time the Breadwinner of the family. However, a child dies — and then ‘Father’ goes on a daily binge.

Buried Child is one of Sam Shepard’s most realistic plays. It sure is surreal. Dysfunctional is an understatement for this crazy family. The gruesome ending kinda telegraphs throughout with some very heavy handed exposition. However, the high octane performances make it a thrilling ride.

No need to worry about your mind. You will get involved with all the surrealism and symbolism in this family drama. The aging dysfunctional patriarch (Knapp) is a dying alcoholic. He is ashamed that his wife (Halie) conceived a child that is not his.

Then there is Tilden. He has no purpose in life. No direction at all. He’s confused/ashamed and embarrassed about a child and its death. Plus – he is bullied by the other characters. He wanders around and brings vegetables to the house. They are not their veggies — he steals them from another farmer.

Then there is the aggressive brother. He lost his leg in an accident. He is emasculated by the removal of his leg.

Halie is the wife and mother. She hates them all except for one. She nags her husband Dodge. He tells her to shut up. She still nags.

Vince is the only Son left that seems to know what he is doing. Halie (his mother) worships him. No one recognizes him when he comes back to the farm. Maybe they really do recognize him — but they may want to ignore him.

There is lots of stuff going on in the Farmhouse. There is incest and a child is murdered when born. There is a priest that kinda hangs out at the house. He likes Halie. But he fails as a moral guardian. It’s another breakdown of morality.

Vince’s girlfriend (Shelly) thinks that they are all Nuts! And she’s right. If ever there was an insane asylum — this is it. Shelly — leaves this alcoholic place where everybody bullies each other.

This is the best version I have ever seen of “Buried Child”. There is crackerjack action and really strong performances. This Shepard play has everything – A strong story, superb cast and plenty of surprises.

NOW PLAYING AT THE MAGIC THEATRE AT FORT MASON