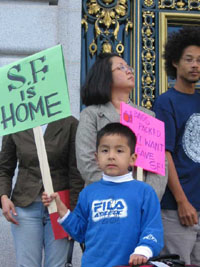 Yesterday a handful of San Francisco parents from the Budget 4 Families Coalition personally delivered about 700 postcards to the Mayor’s Office. The coalition, spawned from Coleman Advocates for Children and Youth, are trying to get Mayor Gavin Newsom and the Board of Supervisors to commit to the $10 million needed to keep families healthy and in San Francisco.

Gisela Venegas said that for a single mother like herself, housing assistance is a must living in San Francisco and she wants the Mayor to know that families cannot wait.

“Without assistance I will definitely have to leave the city and do what is best for my child,” said Venegas. “The children are the ones who get hurt.”

The postcards stated in three languages “I support Speak Up for Families $10 million budget plan to help keep families in San Francisco and we need you to support it too!” They also invited the Mayor to come to Coleman before June 1, which is Mayor Newsom’s deadline to pass along a budget to the Board of Supervisors. Coleman Executive Director N’Tanya Lee said that they remain very hopeful that Mayor Newsom will back the entire agenda, not just some aspects.

“This [postcards] will give a personal face to this issue,” said Lee. “And, it will show who is invested in this issue.”

On April 8 Coleman hosted Speak up for Families Day, where Supervisors Tom Ammiano and Chris Daly signed the check for $10 million and pledged their support. Supervisors Mirkarimi and Maxwell promised their support as well. Roughly 800 families came out affirm their commitment to various services that benefit the community.

Lee also said that is important to differentiate the families that choose to leave the city and those that are pushed out.

“The families that are being pushed out are our teachers who cannot survive on a moderate to low income,” said Lee. “And they’re located throughout the city.”

Although San Francisco’s minimum wage is the highest in the country at $8.82 per hour, Lee estimated that in order to afford a two-bedroom apartment one would need five full-time minimum wage jobs.

Rosario Ramirez lives in SoMa and shares a studio apartment with daughter and husband.

“This is not a huge agenda what we’re asking for,” said Ramirez. “Things definitely could be better.”

Ramirez said that she’s lucky that the owner of their building does not want to sell. But, if he did they would have to move out of San Francisco because Ramirez is sure that a high-end housing development will replace it, just like other areas of SoMa.

Mother of one Siu Cheung said that she knows of many families that have relocated to Vallejo and as far as Sacramento because of the high rent. She also knows of five-member family that shares a SRO in order to make ends meet.

“These conditions are not healthy for families,” said Cheung. “When my daughter asks me if she can have her own room, I feel very sad because I cannot afford it.”

Cheung said that her daughter is forced to do her homework on the dining room table because she has no personal space.

“I would like her to have a computer, but even if I could get one we have nowhere to put it,” said Cheung.