Brazilian Archbishop Blathers On About Jews 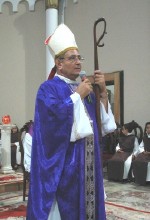 “More Catholics than Jews have died in the Holocaust, but this is not usually told because Jews own the world’s propaganda.” The rantings of a KKK member? Or someone from the American Nazi Party? No, it’s a quote from Dadeus Grings, the Catholic archbishop of Porto Alegre in Brazil, home to the country’s third-largest Jewish population.

The 72-year-old archbishop, who is of German descent, went on a tirade against Jews in a recent six-page interview in the Brazilian magazine Press & Advertising. “The Jews say that they were the major victims of the Holocaust,” he said, “but the major victims were the Gypsies, who were exterminated. And they don’t mention this.” As I’m sure Grings doesn’t talk about the queer victims of the Holocaust.

In the interview, Grings also condemns stem cell research, supports celibacy in the Catholic clergy and condones the crusades which were directed against Muslims in the “Holy Lands.”

Jewish leaders were quick to respond to Gring’s mis-statements. “It’s not the first time Mr. Grings refers to the Holocaust in a twisted way,” Henry Chmelnitsky, president of the Rio Grande do Sul Jewish Federation, told JTA, the global news service of the Jewish people. “Fewer Jews died in World War II because there were and there still are fewer Jews in the world. Proportionally, the extermination minimized by the archbishop meant the slaughter of most of a people that was already small. By reproducing stereotypes created by the Nazis, Grings positions himself on the wrong side of history.”

Indeed he does. Unfortunately, he’s got a lot of company on this wrong side of history.

Grings’ anti-Semitic remarks follow on the heels of the pope’s un-excommunication of British Bishop Richard Williamson, a Holocaust denier who believes that gas chambers were not used by the Nazis, and 200,000-300,000 (as opposed to six million) Jews were killed. Williamson also once said that “Jews made up the Holocaust, Protestants get their orders from the devil and the Vatican has sold its soul to liberalism.” Williamson, who was excommunicated in 1988 because he was made a bishop by a maverick holocaust-denying archbishop, was recently readmitted to the fold.

Which hasn’t scored the pontiff any points with Jews. Nor has his support for the beatification of Pope Pius XII, who served in the church’s highest position from 1939-1958. The former pope has been criticized by Jewish leaders and others for his failure to speak out against the Holocaust. In fact, a placard accusing Pius XII of silence has been placed under a picture of him at the Holocaust memorial in Jerusalem.

The Brazilian archbishop’s comments are just more egg on the face of the church.